The market started the holiday shortened week at SPX 2477. After a gap down opening on Tuesday, and a drop to SPX 2447, the market rebounded. Wednesday’s gap up opening rallied the market to SPX 2470. Then quiet sideways trading ended the week at SPX 2461. For the week the SPX/DOW lost 0.75%, and the NDX/NAZ lost 1.20%. Economic reports for the week were sparse and mixed. On the downtick: factory orders, the Q3 GDP estimate, plus jobless claims and the trade deficit increased. On the uptick: ISM services, consumer credit and wholesale inventories. Next week’s reports will be highlighted by industrial production, retail sales and the CPI/PPI. Best to your week!

In our continuing weekly coverage of the potential long-term headwinds for the general market, we update the following charts with appropriate comments.

The Transports appear to have completed 5/9 waves up from their 2016 low, potentially ending their bull market. A drop below 8744 would suggest this is more probability than possibility. Since the Trannies sometimes top a few months before the general market this index is worth watching. This week, however, the Trannies confirmed an uptrend after hitting 9010, well above that 8744. This suggest a subdividing Major wave 5,  like Major 3, may be underway. New highs, above 9764 would certainly increase that probability. 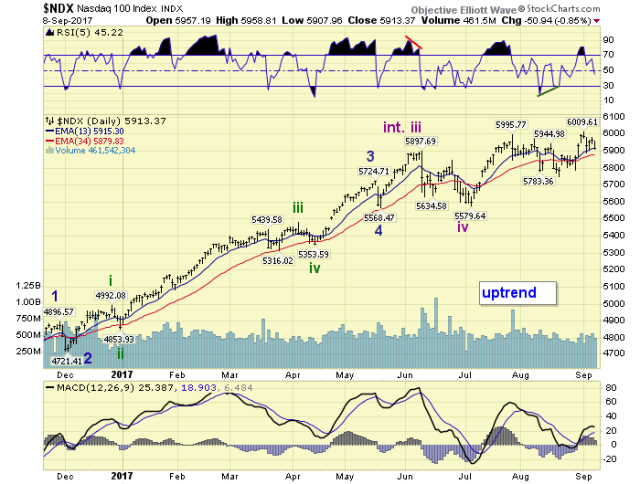 The NDX also displays a potential 5/9 waves up bull market. But it is still currently in an uptrend from 5580. This index is also worth watching, especially if it drops below that 5580 low in July. 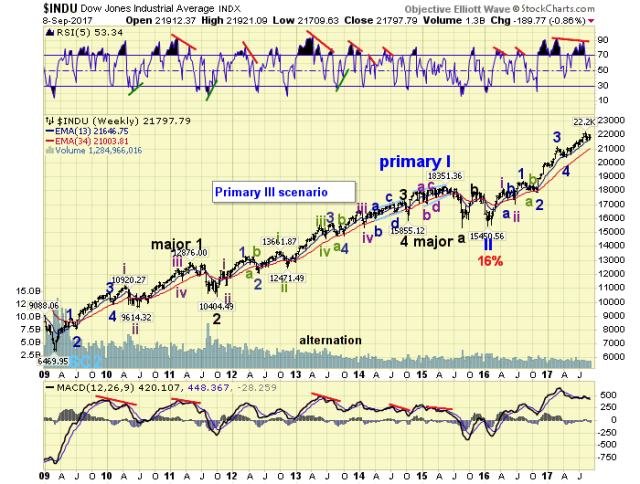 The DOW does not have any of those potential completed bull market counts. It is still in its seventh wave up from its 2016 low. When the next downtrend is confirmed we can label an Int. iii at the recent high. But still the DOW would have to again make all time highs to end its bull market. This index suggests the bull has, at least, months still ahead of it. 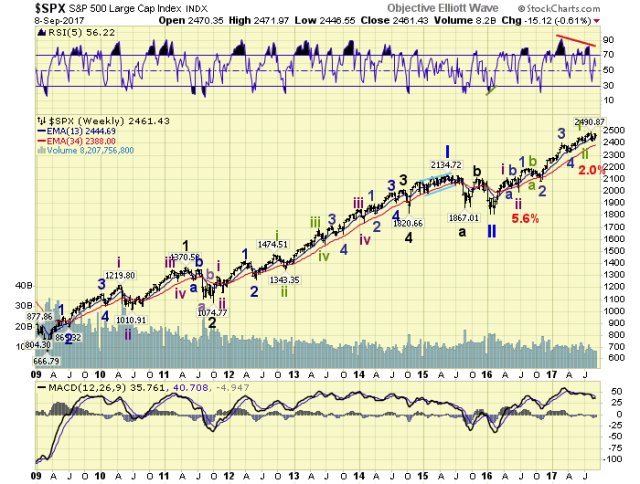 On the SPX daily chart we display the most conservative of count. Minor waves 3 and 4 ending in March-April. Intermediate iii ending in June at SPX 2454. Then an irregular Intermediate iv correction with wave A at SPX 2406/2408, wave B at SPX 2491, and wave C still underway. This irregular pattern should alternate with Intermediate ii, which was an irregular zigzag. This suggests a flat or a, rare these days, triangle. We’ll go with the flat.

An irregular flat suggests the downside for wave C should end around SPX 2400. This is a level the market first encountered as resistance (Mar/May), then support (June/Aug). Once the correction bottoms, then Intermediate wave v should take the market to new highs. Medium term support is at the 2456 and 2444 pivots, with resistance at the 2479 and 2525 pivots.

As an alternate to the above conservative count we display on the hourly chart a more bullish count. This is the reason for the inflection point. This more bullish count still maintains the Minor waves 3 and 4 in Mar/Apr. But the SPX 2454 high only ends Minute wave i of Minor 5, and not all of Int. iii as above. The correction to SPX 2406/2408 in July ends Minute ii, and Minute iii is currently underway. This count seems to be a reach at times, but nothing has occurred yet to invalidate it. We are, however, seeing a potential repetitive pattern emerging. 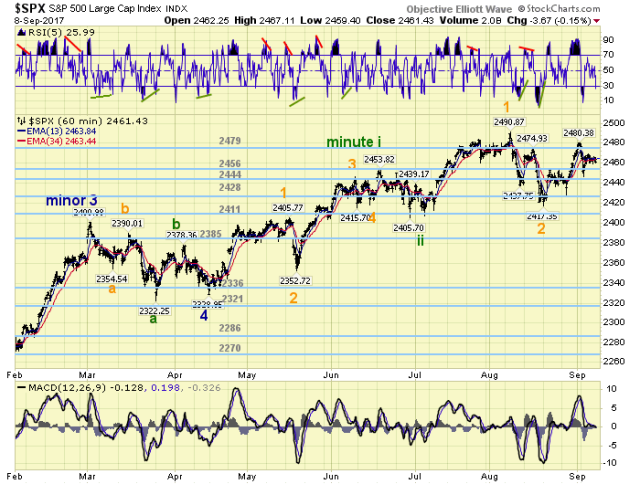 Reviewing the Minor 4 correction you will observe a large a-b-c down, a smaller a-b-c up, then a gradual grind down into the final Minor 4 low in April. The recent activity from the SPX 2491 high in July looks quite similar. A large a-b-c down, then a smaller a-b-c up, followed by sort of a grinding down decline from SPX 2480. Clearly the market can fit either of these scenarios. With SPX 2400 the expected maximum downside and upside unlimited, the risk/reward continues to look favorable. Short term support is at the 2456 and 2444 pivots, with resistance at the 2479 and 2525 pivots. Short term momentum ended the week oversold. Best to your trading!

Asian markets were mostly lower on the week for a net loss of 1.0%.

European markets were mostly lower as well for a net loss of 0.3%.

The DJ World index was unchanged on the week, and the NYSE lost 0.3%.

Bonds continue to uptrend and gained 0.7% on the week.

Crude remains in a downtrend but gained 0.4%.

Gold remains in an uptrend and gained 1.6%.

The USD has been in a downtrend for many months and lost 1.2%.