The week started at SPX 2779. After gap down openings on Monday/Tuesday the market traded down to SPX 2743. Then after a gap up opening on Wednesday the SPX reached 2775 before heading back down to 2744 by Thursday. Friday had a gap up opening, which was sold in the afternoon, and the SPX ended the week at 2755. For the week the SPX/DOW lost 1.45%, and the NDX/NAZ lost 0.75%. Economic reports for the week were mixed. On the downtick: the NAHB, building permits, existing home sales, and the Philly FED. On the uptick: housing starts, leading indicators, and jobless claims improved. Next week: Q1 GDP revision, personal income/spending, and more housing reports. Best to your week!

Lots of chatter this week about OPEC and Crude oil. In the end the Russian/Saudi cartel raised production 1m/bbls per day, and crude rallied $3. Guess the increase was less than the market expected. We last wrote about Crude in August 2016: https://caldaro.wordpress.com/2016/08/23/crude-and-the-commodity-cycle/. What was said then, at $45 Crude, still applies. We are expecting a bear market rally high to reach between $70 and $85 by the year 2020. Then Crude will turn lower, and probably return to $25 around the year 2026. Since Crude has already hit $70 (May18), the $85 level is more likely to occur by 2020. 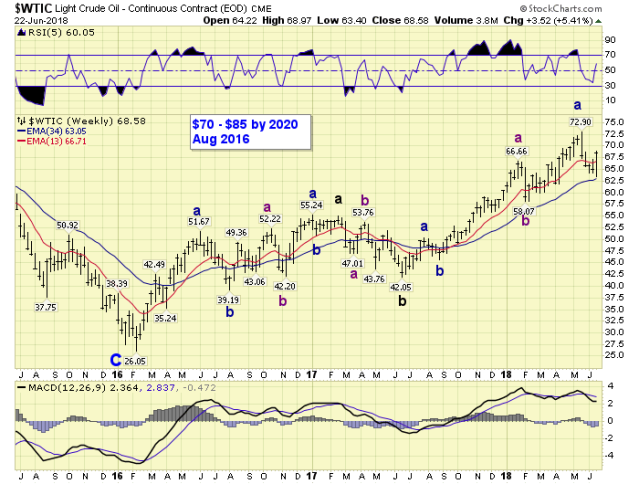 Nothing has changed on the long term count, as you can see by the weekly chart below. A Major wave 1 bull market underway, with all but Intermediate wave v to complete. Intermediate waves i and ii ended in the spring of 2016. Then Int. iii divided into five Minor waves. Minor waves 1 and 2 completed in the fall of 2016, and Minor waves 3 and 4 ended in the spring 2017. After that a very long Minor wave 5, completing Int. iii, in January 2018. Int. wave iv followed with a 3-month flat ending in early-April. A choppy Int. v has been underway since then. 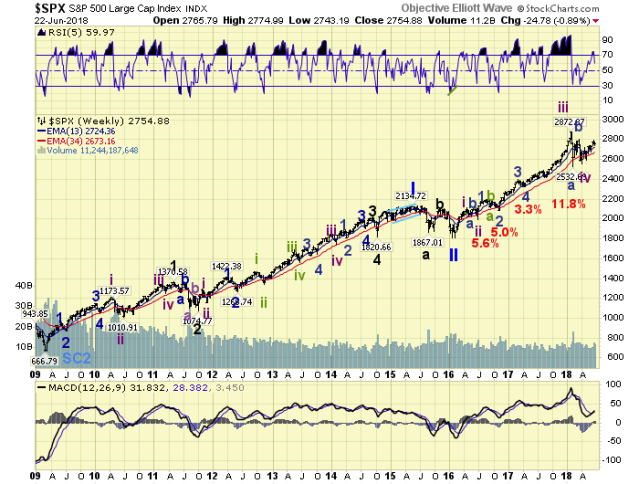 While the general market has been in an uptrend since early-April, only the NDX/NAZ has looked impulsive while the SPX/DOW displays a lot of internal chop and overlapping larger waves. Guess one would expect this type of outcome, if they expected the NDX/NAZ to have a blow off fifth wave while the SPX/DOW formed an ending diagonal triangle. It’s a possibility. 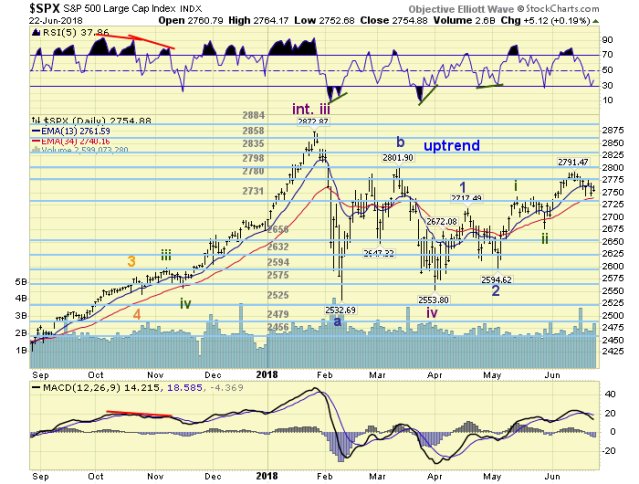 Unfortunately there are a lot of possibilities at this time medium term. The long term target (SPX 3000+ by 2018+) remains on track. For now we continue with the short term count posted. The recent rally SPX: 2677-2791, appears to be just part of Minute iii, possibly a Micro wave 1 and 2. 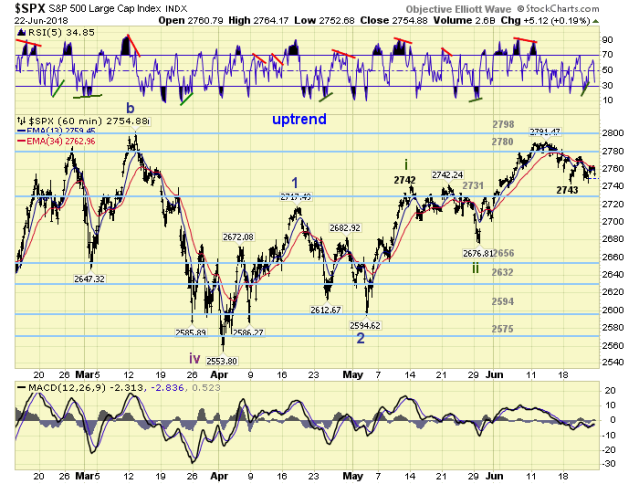 If the market rises above 2791 it starts to look impulsive. If it breaks down below 2729 the corrective activity continues. Short term support is at SPX 2742/43 and the 2731 pivot, with resistance at the 2780 and 2798 pivots. Short term momentum ended the week with a positive divergence. Best to your trading!

Bonds could be uptrending and gained 0.1% on the week.

Crude also could be uptrending and gained 5.4%.

Gold remains in a downtrend and lost 0.6%.

The USD remains in an uptrend but lost 0.1% on the week.