The week started at SPX 2779. The market opened slightly higher Monday. Rallied to SPX 2790. Then bounced off of SPX 2789/91 for the next three days. On Friday’s option expiration, the market gapped down, hit SPX 2762, then rebounded to close unchanged for the week. For the week the SPX/DOW were mixed, and the NDX/NAZ gained 1.05%. Economic reports for the week were mostly positive. On the downtick: industrial production, plus the budget deficit expanded. On the uptick: the CPI, the PPI, the NY FED, retail  sales, import/export prices, business inventories, consumer sentiment, plus weekly jobless claims declined. Next week’s reports will be highlighted by the Philly FED, leading indicators, and housing.

We have been hearing some reports this week that the FED is behind the yield curve, and rates should be at least another 1.5% higher at this time. We disagree. In fact according to the indicator we track for future FED funds, the FED is exactly where the market wants it to be at this stage of the economic expansion. In early 2011 we published the following report on short term rates, and what we track to anticipate them: https://caldaro.wordpress.com/2011/01/18/interest-rates-the-economy-and-the-1yr-t-bill/. Using the 50 basis point rule the current 1YR chart suggests the FED is right where is should be: 1.75% to 2.00%. 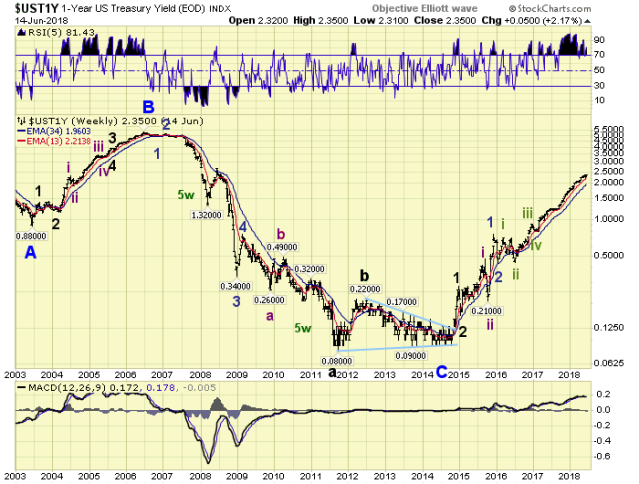 The weekly chart displays the SPX price action since the great recession low in 2009. The market advanced for 6 years, to 2015, to complete Primary I of a Cycle wave bull market. Primary II ended in early 2016 at SPX 1810. Since then the market has been rising in a Major wave 1, of Primary III, bull market. When Major 1 concludes, and it looks like we’re already in Int. wave v, a Major wave 2 bear market should follow. Our mid-2016 projection for this bull market remains SPX 3000+ by the 2018+. 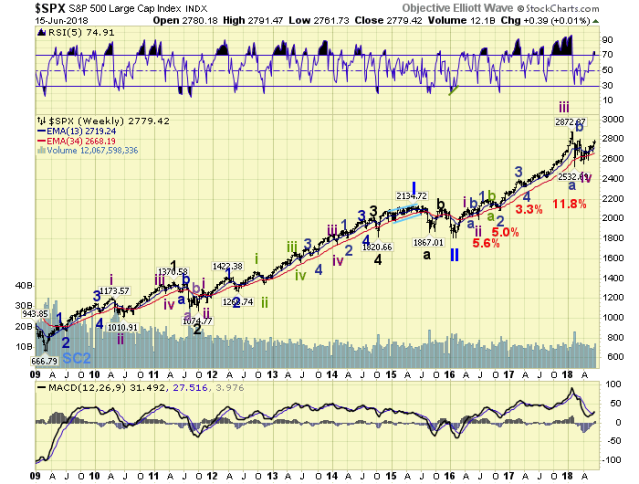 From late-January to early-April the SPX corrected in an Intermediate wave iv flat. This flat alternates with the Q2-2016 Intermediate wave ii irregular zigzag. In fact, even the Minor waves 2 and 4, of Int. wave iii, display alternation. From that early-April low the uptrend has been unfolding in what appears to be a nesting of 1-2’s. 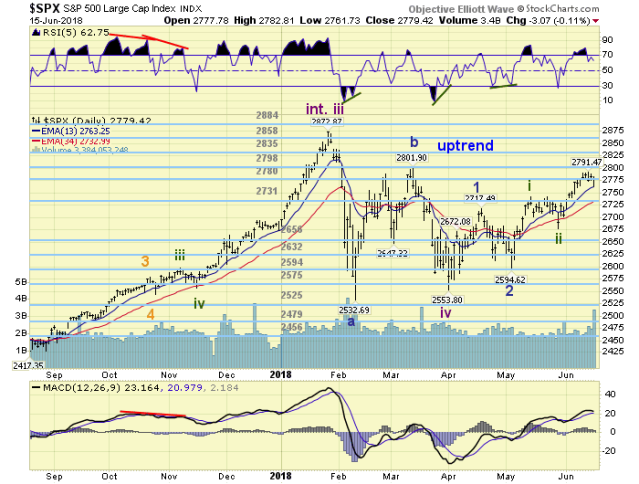 We have labeled SPX 2717 in mid-April Minor 1, and SPX 2595 in early-May Minor 2. Then SPX 2742 as Minute i, and SPX 2677 as Minute ii in mid-May. This count suggests Minute iii has been underway since then. Over the past three weeks the SPX has risen an unimpressive, for a third wave, 100+ points. The market is still looking for a catalyst.

A quiet week as the SPX could not make much upside progress after hitting the OEW 2798 pivot range. In fact, on options expiration Friday the market sold off to SPX 2762 before recovering in the afternoon. The gap down opening and rebound could set things up for the SPX to start impulsing again internally. A rally to SPX 2791 again would help in that regard.

Short term support is at the 2731 and 2656 pivots, with resistance at the 2780 and 2798 pivots. Short term momentum ended the week with a positive divergence. Best to your trading!

Asian markets were mixed on the week and lost 0.7%.

Bonds continue to downtrend and ended unchanged for the week.

Crude remains in a downtrend and lost 1.0%.

Gold also remains in a downtrend and lost 1.9% on the week.

The USD has been in an uptrend and gained 1.0% on the week.