The week started at SPX 2575. After a higher open on Monday to a new all-time high of SPX 2578 the market started to pullback. By Wednesday noon the SPX had reached 2544, and then started to rally. Thursday and Friday both had gap up openings and the market made a new all-time high at SPX 2583. For the week the SPX/DOW gained 0.35%, and the NDX/NAZ gained 1.40%. Economic reports for the week were quite light. On the downtick: consumer sentiment, plus weekly jobless claims rose. On the uptick: Q3 GDP, durable goods and new home sales. A plethora of economic reports next week, highlighted by the FOMC meeting, monthly payrolls, and the ISM’s.

After a one month simple Micro 1 to SPX 2491 by August , we tracked the Nano and Pico waves of a two month Micro 3. That nine wave pattern completed on Monday at SPX 2578. Then after a simple and short Micro 4 by Wednesday, the market rallied to new highs on Friday during Micro 5. While Micros 1 and 3 were quite long in time. We’re not expecting Micro 5 to put on that kind of display. In fact it could end by next week at the OEW 2594 pivot range. 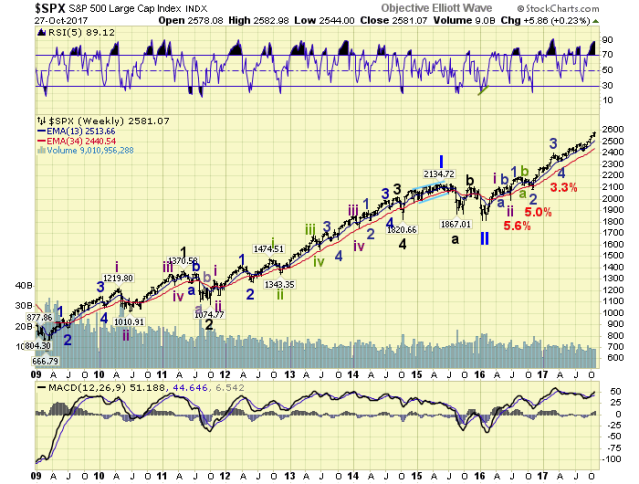 This Minor wave 5 uptrend began way back in April at SPX 2329. It has already risen 254 SPX points, which puts it somewhere in the middle of the three previous uptrends. Those uptrends travelled 301, 202 and 317 points respectively. The count we have been tracking suggests the uptrend is still in Minute iii, with Minute waves iv and v yet to come. 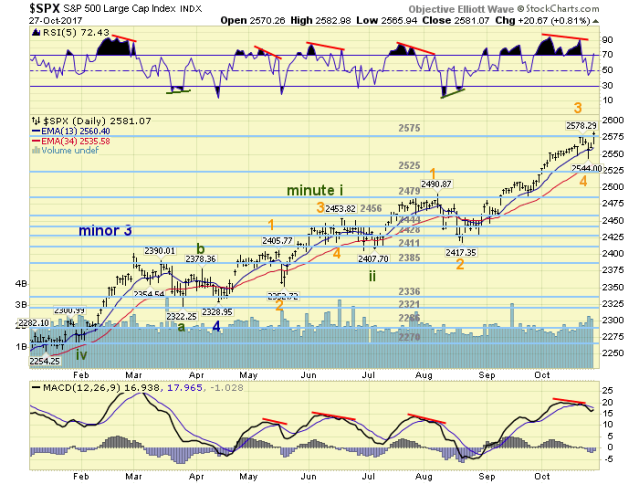 This suggests this Minor 5 uptrend is likely to travel some 300+ points before it concludes. This fits quite well with our upside target to Minor 5 /Int. iii between the OEW 2632 and 2656 pivots. Medium term support is at the 2575 and 2525 pivots, with resistance at the 2594 pivot. 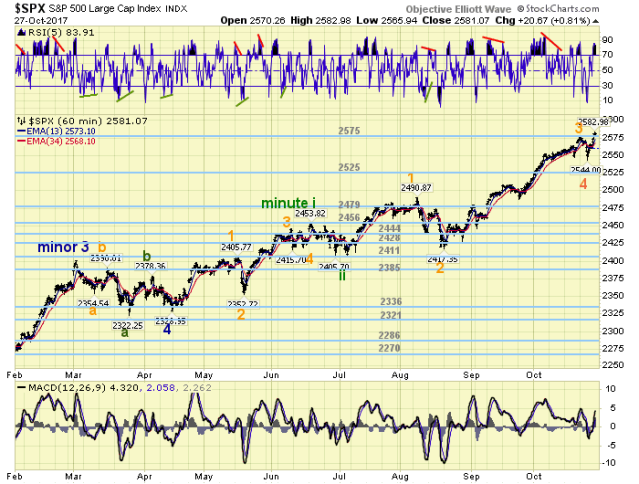 When Micro 5 concludes, so does Minute wave iii, then Minute iv should decline about 50 +/- points. Possibly back to the SPX 2540’s again if it tops at the OEW 2594 pivot range. Then after Minute iv concludes Minute v will carry the market to new all-time highs as the Minor wave 5 uptrend continues. Short term support is at the 2575 pivot and SPX 2544, with resistance at the 2594 pivot. Short term momentum ended the week quite overbought. Best to your trading!

Asian markets were mostly higher on the week and gained 1.0%.

European markets were mixed but gained 0.7%.

Bonds continue to downtrend and lost 0.1%.

Crude is still in an uptrend and gained 4.0%.

Gold continues to downtrend and lost 0.7%.

The USD remains in an uptrend and gained 1.0%.