SPX started out the week with a large gap down and continued lower till late afternoon, to make the low of the week at 2822, before a brief rally to finish Monday down at 2845.  Last week’s close was 2932.  Tuesday gapped down again and retested within a few points off the low in the first 20 minutes of trading, then made a strong rally for the rest of the day with only one small pullback along the way, to finish higher at 2884.  Thursday gapped higher and continued to rally straight up with no pullbacks to finish the day just off the high at 2938.   Friday opened lower and continued down to 2900 by noon, then reversed course and rallied back to close the week at 2919.  A consecutive week of volatility!

In the US, the long-term count remains unchanged with the Super Cycle SC2 low in March 2009.  The Primary wave I high occurred in May 2015 and Primary wave II low in February 2016.  Primary wave III has been underway ever since.  Major wave 1 high of Primary wave III occurred in October 2018 and Major wave 2 low in December 2018.  Intermediate wave i of Major 3 is now underway and is subdividing into Minor and Minute waves.  Despite the recent volatility and calls by some for the end of this bull market, we see no evidence yet to suggest these subdivisions are anything more than typical medium term downtrends in context of an overall bull market profile.  We will update the long term status, if/when anything develops to change this view.

SPX opened lower for the second week in a row and accelerated down, but seemed to find a near term bottom on Monday at 2822.  This gives 200+ points so far for this Minute wave ii downtrend that we believe has been underway since mid-July at the 3018 early top.  Although it’s exceeded the typical 5% decline mentioned last week, the 6.5% decline so far is still within the norm for this bull market.  SPX retested the low on Wednesday for an apparent double bottom, then rallied back above the 50% retracement zone, but ran into resistance there.  Consequently, we updated our medium term status to reflect a potential Minute wave ii bottom with the possibility of another retest before it’s complete.  A rally above 2950 or so will further confirm the Minute wave ii bottom.  If SPX breaks lower, then we will revaluate.

Some in our group pointed out a possible correlation of this downtrend with prior declines triggered by Tariff Man Tweets (TMT).  We’ve had three occurrences of these tariff threats since December and each time the market sold off in the 200+ point range.  We’ve annotated the medium term chart to show this effect.  The May selloff bottomed after a 200+ point decline.  The Dec selloff paused at 200+ points, but then continued lower after Fed autopilot comments (PAP on chart), which likely contributed to that extension.

SPX followed the DOW profile from last week and got extremely oversold at the low, the most so since Major wave 2 last December.  We will be watching the short term waves for direction of the pending rally.  Although we still expect Minor wave 3 to exceed the 3300 level, our medium target for Minute wave iii will be updated after it becomes clear that a new uptrend is underway.

Medium term, RSI is in the neutral zone and MACD is turning back up.  DOW generated a positive divergence off the low on Wednesday. 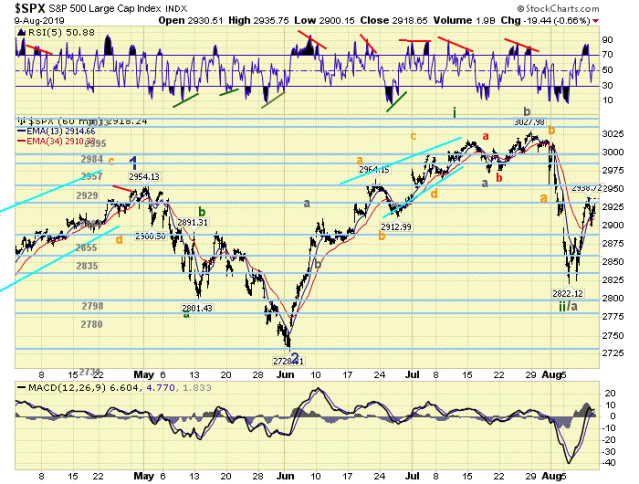 SPX gapped down and blew right through our support targets mentioned last week to reach beyond the 61.8% retrace level of Minute wave i, but was able to close above that level at 2845.  From there, SPX rallied to fill the gap and close the week back above the 38.2% retrace level at 2919.  We noticed a pattern developing this week based on our qualified small waves and short term tracking techniques, so we adjusted the count accordingly.  We continue to track the irregular Minute wave ii previously discussed, but have rescaled the count to reflect a double three pattern.  That gives an irregular zig-zag for Micro wave a, [3018]-2973-3028-2958, followed by Micro wave b single wave rally to 3014.  Micro wave c then suggests a potentially complete zig-zag pattern at the low [3014]-2914-2944-2822.  We can also make a case for an elongated flat into the higher low at 2826, but either one suggests a completed double three pattern from the Minute wave i top.  From there, we can count two waves up from the failed bottom, [2826]-2939-2900, with a potential third wave still developing.  There’s still a possibility of another retest of the low as shown with the optional ii/a label on the chart.  We’re waiting to see if this rally can impulse or is going to fade into another b-wave.

Bonds are in an uptrend and gained 0.64%