This week opened with a gap up in SPX to 3018, which was the high of the week, but quickly reversed to fill the gap within the first 10 minutes, then proceeded to trade in a narrow range for the rest of the day to close Monday exactly where it left off last week at 3014.  SPX traded down both Tuesday and Wednesday to a low of 2985 by the close on Wednesday.  Thursday saw a gap down at the open, rally back to fill the gap, followed by another decline to make the low of the week at 2973 by noon.  From there, the market had a strong rally to end Thursday up 10 points on the day at 2995.   Friday had another gap up to a high 3006 within the first 10 minutes of trading, then proceeded to decline for the rest of the day to close the week just off the low at 2977.

On the economic front, Empire State Manufacturing and Retail Sales (including ex-Autos) were higher, while Import and Export Prices were both lower. 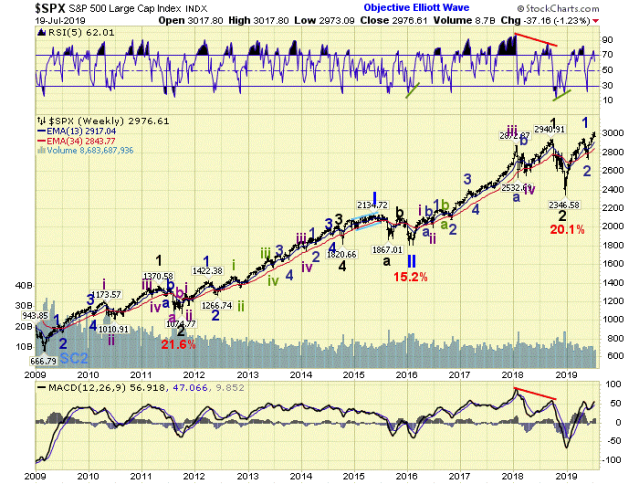 SPX was able to briefly extend the rally this week to an intraday high of 3018, but could not hold it beyond Monday’s open and then proceeded to decline to a low of 2973 on Thursday.  Although the pullback so far is a modest 45 points, it was sufficient to signal the first subdivision of this uptrend.  As a result, we have updated our medium term count to show a completed Minute wave i of Minor wave 3.  Normally we would expect Minute wave ii to be a larger decline, so we are anticipating that this wave has more to go.  The notional size for this decline would be about 80-100 points, however this uptrend has been resistant to pullbacks, so Minute wave ii could end at any time.  We will be watching the short term waves for possible Minute wave ii extensions.  The first logical target for Minor wave 3 completion remains at the 3300 level.

Medium term, the RSI set up a multiple negative divergence at the high and the MACD exhibited the first bearish cross of this uptrend.

Using our short term techniques, we continue to count Minute wave i as five Micro waves up from the Minor wave 2 low [2729]> 2911> 2875> 2964> 2913> 2996.  This suggests Minute wave ii has been underway ever since and is subdividing into a complex irregular three pattern with Micro wave a = 2963, Micro wave b = 3018, and Micro wave c ongoing with possible subdivision.  We labelled the first Micro wave c subdivision as small “a” wave down at 2973 and waiting now on further price action.  Although the irregular b wave rally exceeded our target of 3016 mentioned last week, it was too small and too brief to invalidate that pattern.   Our alternate count suggests Minute wave i ended at 3018 as a contracting diagonal triangle.  Either way, we believe the inflection point has been resolved and Minute wave ii is in progress with further downside likely.  Logical target for completion of Minute wave ii would be the prior Micro wave 4 low at 2913, however there’s still support nearby at the Micro wave a low of 2963.

Bonds are in an uptrend and gained 0.45%