This week started off with gaps down both Monday and Tuesday, which hit the low of the week at SPX 2963 within the first hour of trading Tuesday morning.  SPX closed last week at 2991.  From there, the market rallied for the rest of the week, seeming fueled by Fed Chairman Powell’s testimony of a “very likely” rate cut next month.  Wednesday began with a gap up and rally to 3003 within the first hour, then pulled back and traded in a range the rest of the day to close at 2993.  Thursday had another small gap up to 3002, then traded in a range and closed at an all-time high of 3000.  Friday had another small gap up and then proceeded to rally all day to close on the high of the week at 3014. 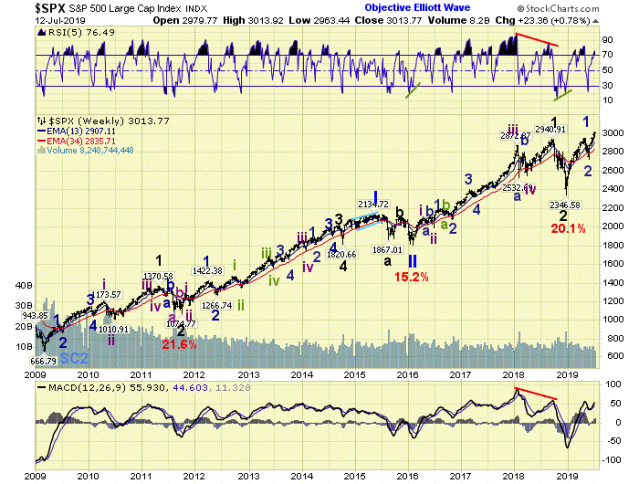 Not much has changed this week as the uptrend continues to extend reaching all-time highs now at 3014.  The small pullback early in the week was insufficient to trigger any medium term subdivision, so we continue to count this rally as Minute wave i of Minor wave 3, which has been in progress since the Minor wave 2 low at 2729 on June 3rd.  This wave has now achieved 285 points in 28 trading days and has become the longest such rally of our Primary wave III bull market since the exponential rise from Dec 2017 to the Intermediate wave iii top in January 2018. We’re still cautious that a more significant pullback could occur at any time, but the market keeps pushing through our short term targets and pivots.  The first logical target for Minor wave 3 completion remains at 3300. 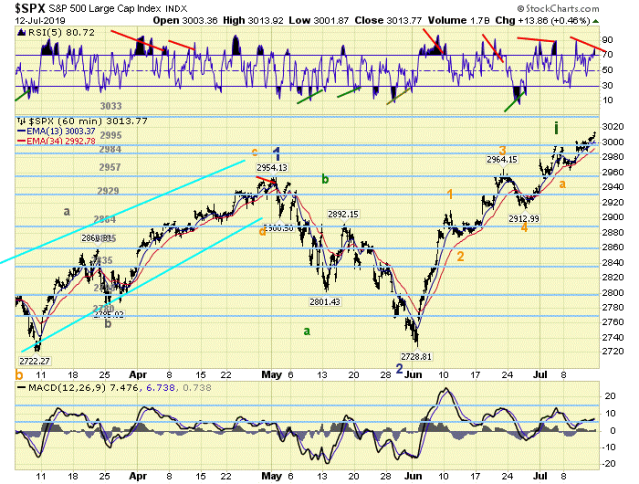 Using our short term tracking, we can now count seven waves up from the Minor wave 2 low [2729]> 2911> 2875> 2964> 2913> 2996> 2963> 3014, which sets a short term inflection point.  The 33 point pullback to Tuesday’s low at 2963 completed the impulsive pattern of five Micro waves as previously reported.  However, the subsequent rally beyond our 3002 target to new highs created an ambiguity.  We can’t yet rule out the possibility of an irregular Minute wave i top.  After much discussion within the OEW group, we decided to track the irregular scenario till the market dictates otherwise.  This suggests Micro wave 5 completed at 2996 and Minute wave ii is subdividing into three waves, Micro wave a = 2963, Micro wave b = 3014 so far, with Micro wave c to follow.  Above 3016, Micro wave b would be greater than 1.618x Micro wave a, which exceeds our limit for this count and suggests something else may be in play.  We have a couple of alternative counts under consideration and will report on those when the time comes.  Friday’s close got within 2 points of our limit, while sitting at another short term divergence at the high.

Short term support is at the 2995 and 2984 pivots.  Resistance is at the 3033 pivot.  Short and medium term RSI both have negative divergences.