The week opened lower as the SPX gradually declined all day Monday to a low of 2944.  Last week’s close was at 2949.  On Tuesday the decline accelerated and continued throughout the day to a low of 2916 within the final hour of trading.  On Wednesday the SPX bounced up to 2933 at the open, but quickly reversed and proceeded to decline for the rest of the day to find the low of the week in the late afternoon at 2913.  Thursday and Friday saw a steady rally up to a high of 2944 within the last hour of trading and closed the week at 2942. 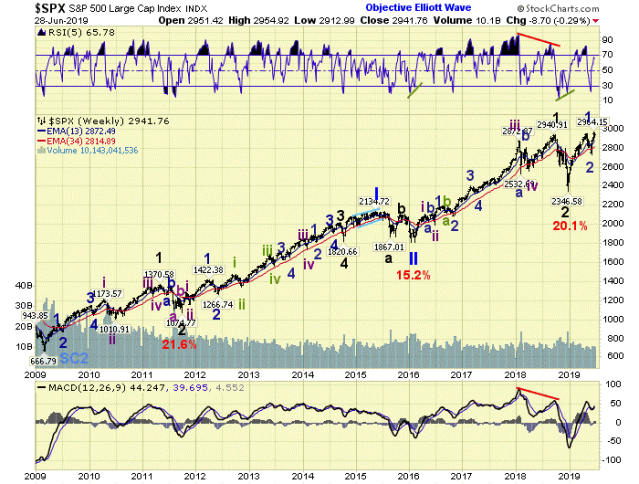 In the US, the long-term count remains unchanged with the Super Cycle SC2 low in March 2009.  The Primary I high occurred in May 2015 and Primary II low in February 2016.  Major wave 1 high occurred in October 2018 and Major wave 2 low in December 2018.  Intermediate wave i of Major 3 is now underway and is subdividing into Minor waves. 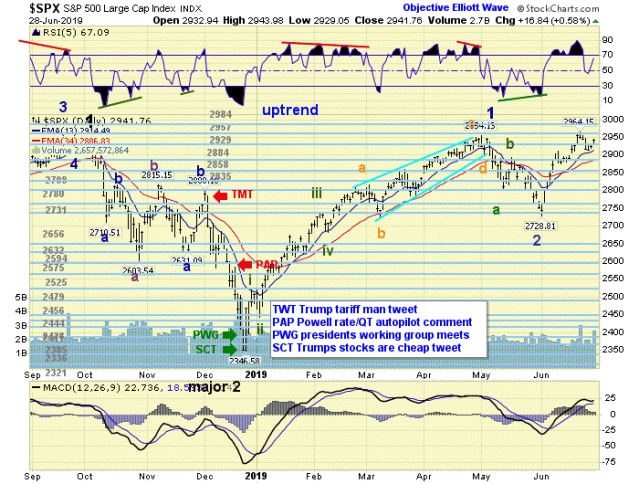 This week the market paused as SPX generated a 51 point pullback to the low of the week at 2913 on Wednesday, then rallied on Friday to close at 2942, which regained most of the ground lost.  Although NAZ and NDX were still unable to confirm an uptrend, most share markets and sectors we watch have confirmed, except for a few non-US markets.  No change in status this week and we’re still expecting NAZ and NDX to follow in the coming days.  The Minor 3 wave rally continues to hold at 235 points to last week’s high of 2964 and has yet to generate any medium term subdivision.   First logical target for Minor 3 wave completion remains at the 3300 level.  Still watching for a potential impulsive subdivision of Minute waves using our short term tracking techniques.

As mentioned in last week’s report, we were expecting another small pullback for the Minor 3 rally and this week delivered that outcome.  Although the 51 point decline was a little larger than expected, it wasn’t sufficient to generate an overlap.  So we now can count four waves up from the Minor 2 low [2729]>2911>2875>2964>2912, with the fifth wave in progress of a potential impulsive structure.  We also mentioned the two most likely options for this rally and as shown, we’re favouring the small Micro 3 wave scenario until the market proves otherwise.  This suggests an upper limit for Minute-i of 273 points, to a high of 3002, since the third wave of a valid impulse can’t be the smallest.  The Nano wave subdivision option remains on the table as an alternate count, if/when this next rally can exceed the Micro 3 rally of 89 points.

Short term support is at the 2929 and 2884 pivots.  Resistance is at the 2957 and 2984 pivots.  Short term RSI got extremely oversold on Tuesday and set up a nice positive divergence at the Micro 4 low.

Bonds are in an uptrend and gained 0.38%

Crude oil is in a downtrend and gained 1.81%