The week began quietly as Monday continued the consolidation from last week.  The SPX gapped higher on Tuesday, rose to 2931, and then traded in a narrow range in front of the FOMC announcement on Wednesday.  The dovish Fed pushed the SPX higher with a gap up on Thursday.  The weekly high was reached mid-day on Friday at 2964, and the SPX closed at 2950 with late day volatility associated with Quadruple Witching options expiration.

The ECRI Weekly Leading Index Growth moved back below zero over the last few weeks. 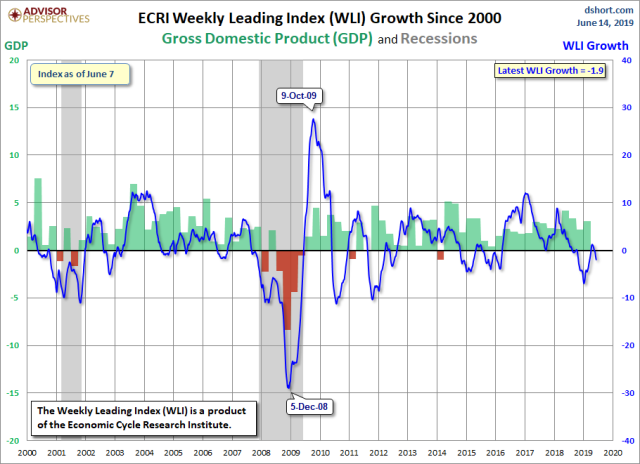 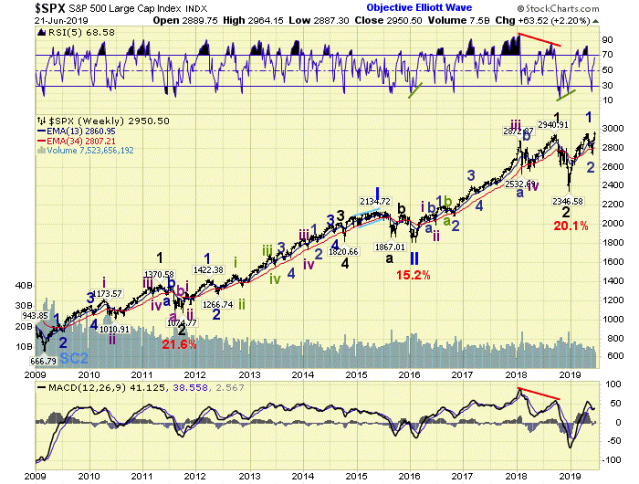 In the US, the long-term count remains unchanged with the Super Cycle SC2 low in March 2009.  The Primary I high occurred in May 2015 and Primary II low in February 2016.  Major wave 1 high occurred in October 2018 and Major wave 2 low in December 2018.  Intermediate wave i of Major 3 is now underway and is subdividing into Minor waves.  Minor waves 1 and 2 completed by the first trading day in June and Minor wave 3 has been ongoing since then.  Interesting to note that the DOW subdivided with an irregular Minor 2 from its Minor 1 rally high in February and consequently became more oversold this month at the Minor 2 low than the Major-2 low in December (see weekly chart below). 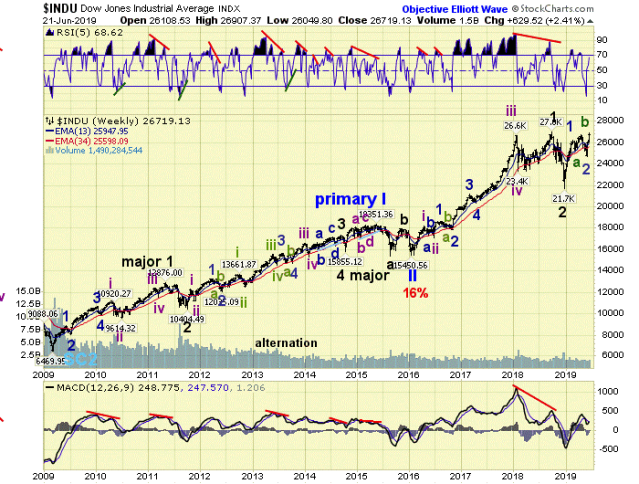 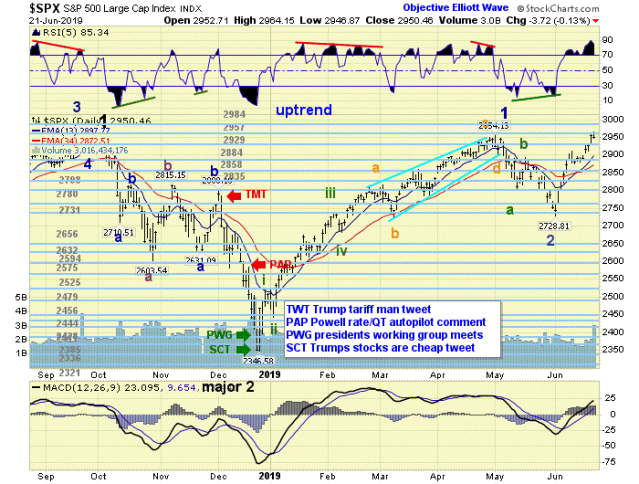 As discussed in the previous report, we were expecting an uptrend and this week both Dow and SPX delivered on that outcome.  As a result, the status of Minor 2 has been updated from tentative to confirmed.  We are expecting NAZ and NDX to follow in the coming days, as these indices have a much larger % decline to overcome from their Minor 2 lows (10-12%).  This suggests that Minor 2 bottomed on the first trading day this month at 2729 and Minor 3 has been in progress ever since.  The Minor 3 rally has been quite strong, achieving 235 points so far to the high on Friday of 2964, without any medium term subdivision.  Our first logical target for Minor 3 completion would be equal to Minor 1, which projects approximately 600 points up to over the 3300 level.  We’re now watching for a potential impulsive subdivision of Minute waves using our short term tracking techniques.

As mentioned, we have Minor 2 confirmed at 2729 and can count three small waves up so far from the low using our short term techniques.  Micro 1 at 2911, Micro 2 at 2875 and Micro 3 at 2964, with a negative divergence now building at the high.  This suggests another small pullback around 30-40 points may be forthcoming in the near term.  There are several options under consideration for this rally depending on the timing and depth of the next pullback.  Most likely would be either a small Micro 3 wave near completion or a possible subdivision to include Nano waves.  We need more price action to sort that out.

Short term support is at the 2929 and 2884 pivots.  Resistance remains at the prior high of 2954 and above at the 2957 and 2984 pivots.  Short term RSI got overbought at the gap up on Thursday, then set up a negative divergence into the high on Friday.

Bonds are in an uptrend and gained 0.7%

Crude oil is in a downtrend and gained 8.7%

Gold is in an uptrend and gained 3.9%

Have a good week!  Good luck trading the G-20 meeting!