Posted on March 23, 2019 by the OEW group in honor of Anthony Caldaro

The SPX, NAS, and NDX reached higher levels this week while the Dow remained under the recent recovery highs.  The SPX rose to 2852 on Tuesday but then fell to 2812 before the FOMC decision on Wednesday.  The Fed announcement caused an afternoon rally to 2842, but price declined again into the close.  Price gapped lower on Thursday’s open with the SPX falling to 2817, but buyers stepped in quickly and the SPX rallied to the weekly high of 2860.  The SPX gapped down on Friday, fell to 2802, recovered in the afternoon, but sold off to 2801 into the close.  Quite a volatile day and week!

On the economic front, we saw an uptick in the Philadelphia Fed Index, Leading Indicators, and existing home sales.  Factory orders and the NAHB Housing Market Index were unchanged.  The FOMC held rates steady and announced the end of the Fed’s balance sheet reduction in September.

We continue to track the three highest probability wave counts as discussed in last weekend’s report.  The divergence between Dow and other major indices continues, so we favor our conservative outlook of a complex Minor 2 correction underway as shown on the Dow chart.   Choppy price action suggests a corrective rally off early March lows and weakness into the close supports this view.  Should the Dow reverse course and rally to new recovery highs, this wave count may be eliminated.  Minor wave labeling remains tentative until further price action is developed. 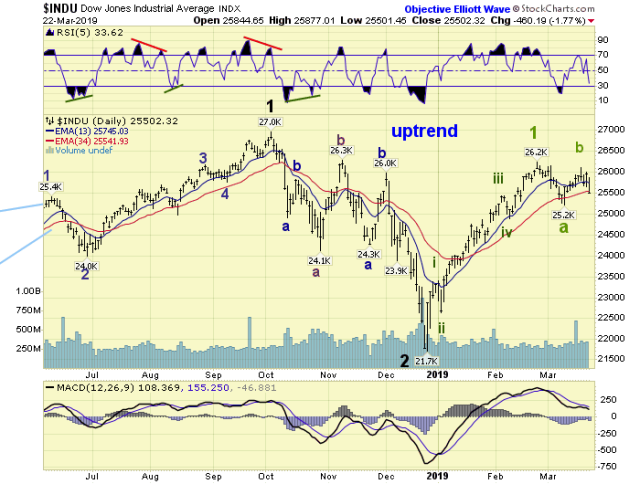 The daily SPX chart shows the near-term bullish wave count with Minor 1 and Minor 2 complete at 2817 and 2722, respectively with Minor 3 underway.  Early price action off the 2722 low was strong but has since become choppy.  Strength in NAS and NDX has been supporting this wave count as well.  Sharp reversal on Friday was largest pullback of the rally so far and sufficient to qualify another wave, suggesting Minor 3 may be subdividing.

For SPX, we can count three small waves up to this week’s high, 2852>2812>2860.  This suggests either a corrective B wave rally, which supports our primary view of an ongoing Minor 2 correction, or an irregular subdivision for Minor 3 as noted on the SPX daily chart.  Last week’s count showing Micro 3 of Minute v was eliminated due to overlap of Micro 1 and has diminished the possibility of a Minor 1 extension.  Until SPX clears 2876 and/or the Dow reaches new recovery highs, trend weakness remains on the table.

We will continue to track all of these probable wave counts, and again suggest patience while the markets remove the uncertainty through additional price action.  We believe this uncertainty will be resolved in the coming days or weeks.

We’re in process of updating charts in the Public Chart List with current OEW status and hope to have that completed in the near future.

Bonds yields are in a downtrend with the 10 year treasury falling 5%.

Crude remains in an uptrend and gained 0.9%.

Bitcoin is in an uptrend and gained 1.6%.

The USD is in an uptrend and was flat.

Best wishes to all