The market started the holiday shortened week at SPX 2671. Tuesday started with a China-US related gap down opening to SPX 2654. The decline continued until it hit SPX 2617 in the last hour of trading and then rebounded into the close. Wednesday a gap up opening to SPX 2653 was sold off to SPX 2613 by noon. Then the market rebounded again into the close. Thursday a quiet open led to a slightly higher close. Then on Friday the market gapped up to SPX 2661 on reports the FED may be halting Quantitative Tightening. Then the market hit SPX 2672 before settling the week at SPX 2665. For the week the SPX/DOW was mixed, and the NDX/NAZ gained 0.05%. Econ0mic reports for the week were sparse, as most were delayed due to the government shutdown. Two downticks: existing home sales and leading indicators. One uptick: weekly jobless claims improved. Next weeks reports are plentiful, highlighted by the FOMC meeting, Q4 GDP (est. +2.6%), and monthly Payrolls. Best to your week! ECRI ticked up again this week. Low was -6.5% two weeks ago. 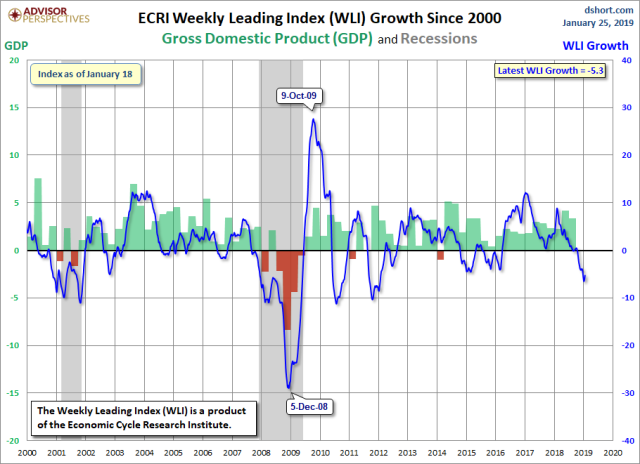 Over the past several months we had been reporting the deterioration in the foreign markets as the US markets continued to climb. Then after the US markets topped and joined the foreign indices we noticed a potential shift in late-December. The foreign indices that led the bear market declines appeared to be in their last downtrends of their bear market. This week we report that Australia, Hong Kong, Singapore, and S. Korea all appear to have bottomed, and are now in their first confirmed uptrend of a new bull market. Canada joins this list as well, and Brazil continues to make new bull market highs. 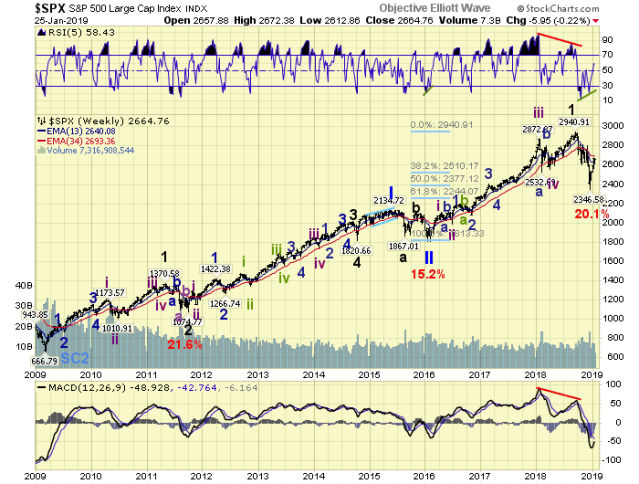 No change in the US markets. After a 2009 super cycle low the market advanced for six years into a Primary I bull market high in 2015. A Primary II bear market followed into early 2016. Then Major wave 1 of Primary III bull advanced from February 2016 to October 2018. This was followed by a bear market into a late-December low at SPX 2347. If that was the low, an Intermediate wave I of Primary III bull market is now underway. If not, we expect a retest of that late-December low then an Intermediate wave I bull market to commence. In either case the bear market is either over or close to being over. 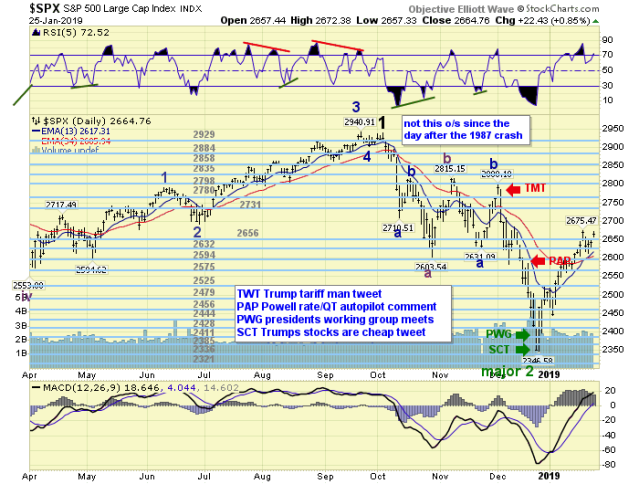 On Wednesday we noted some price parameters based upon the markets action this week. We currently see three waves up in the SPX. If at any time the SPX drops below to 2615 then that could be the 4th wave providing: 1. the market then rallies above 2675 and 2. the market does not drop below 2520 first. The former would suggest a five wave sequence higher, the later a three wave rally and retest of the lows. In either case it looks like the SPX will confirm a medium term uptrend this week.

Over the past several weeks we have been tracking this rally from SPX 2347. At first it looked a bit choppy, then five waves were completed at SPX 2520. Then the market did go into chop mode which ended at SPX 2444. We’ve labeled that high and low as waves i and ii. 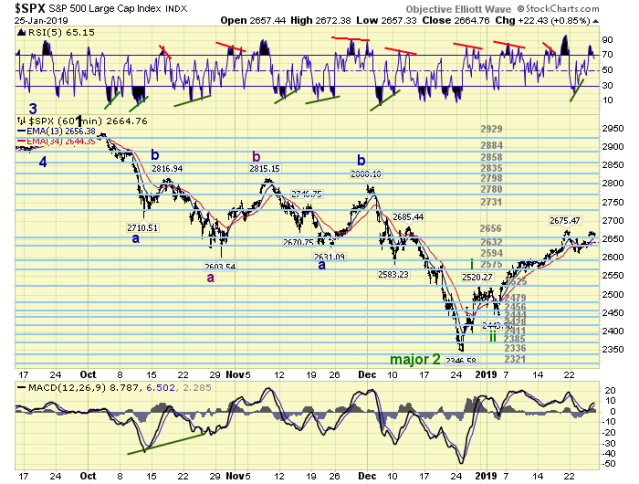 Since then the market did several choppy waves up, then spurted higher in a good rally to SPX 2675. This week the market sold off early in the week hitting SPX 2617, then SPX 2613, before rallying into week’s end. This is how we are quantitatively counting this uptrend’s short term waves. This count will fail if the market drops below SPX 2598. A member of our group offered a slight alternate to this on Friday should it fail. 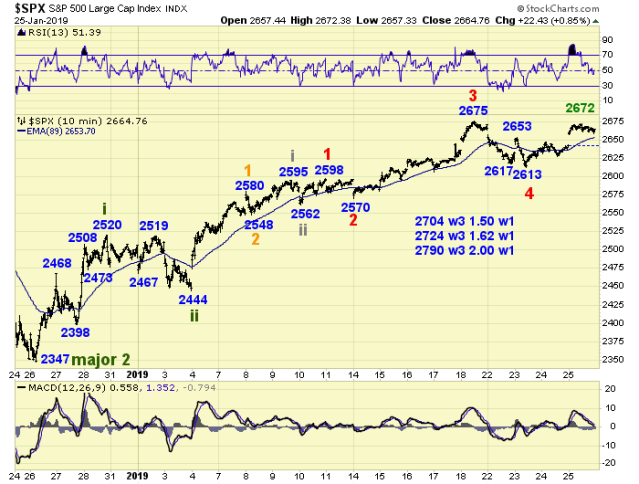 Short term support is at the 2656 and 2632 pivots, with resistance at the 2731 and 2780 pivots. Short term momentum ended the week overbought. Best to your trading FOMC week!

Bonds continue to uptrend and gained 0.3%.

Crude continues to uptrend but lost 0.7%.

Gold remains in an uptrend and gained 1.2%.

Bitcoin appears to be starting an uptrend but lost 1.5%.

The USD remains in a downtrend and lost 0.6%.