The week started at SPX 2596. After a gap down opening on Monday to SPX 2570 the market rallied to SPX 2589. Tuesday and Wednesday the rally continued to SPX 2626. Another gap down opening on Thursday dropped the SPX to 2606 at the open. But then the market reversed, and rallied to SPX 2675 by Friday. For the week the SPX/DOW gained 2.95%, and the NDX/NAZ gained 2.75%. Economic reports for the week were mixed. On the downtick: the PPI, NY FED, import prices, and consumer sentiment. On the uptick: the NAHB, Philly FED, industrial production, capacity utilization, plus jobless claims improved. Next week’s reports will be highlighted by durable goods orders and housing. The ECRI ticked up 0.3% this week from -6.5% to -6.2%.

After writing this blog for over 13 years, and reading over 200 emails a day, it is often hard to remember who said what and when, including oneself. That’s why I keep notes. My notes. Week of Sept 17th: mentioned after two year bull run it was time to get cautious. Scale out during bull market tops, and scale in during bear market bottoms came next. Week of October 22nd: consistent weakness in most of the foreign markets, with Canada, China, Germany and Spain already in confirmed bear markets. Week of November 26th: after a bear market rally many US indices looked ready to enter the next downtrend. Week of December 3rd: after the POTUS Tariff Man tweet sensed a potential mini-crash. Week of December 17th: the market needed some sort of event to halt the decline, i.e a PWG event. Week of December 24th: many of the foreign markets appeared to be in their last downtrend of their bear markets. This week: we offered on Wednesday, and will repeat below, the five criteria to help in determining the probabilities of the market retesting the December lows or already in a new bull market. 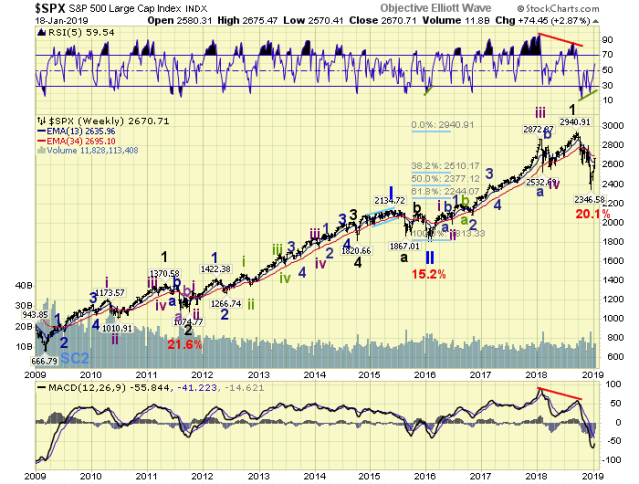 The long term count remains unchanged with the exception of the recent low around Christmas. Primary I unfolded from 2009-2015. Primary II was a moderate bear market from 2015-2016. Major wave 1 of Primary III advanced from 2016-2018. And now probabilities suggest a Major 2 bear market lasted from September/October until December of 2018. If this works out to be correct an Intermediate I, of Major wave 3, bull market should be underway.

In Wednesday’s update we published the following. We’re using five criteria to hopefully determine if the market will still retest the low to end Major 2, or the bear market has already ended. The criteria are: the size of rally, NDX/NAZ and SPX/DOW wave patterns, rebound percentage from the low, and breadth rise from the low.

First, this rally is the largest rally since the bear market began: a positive. Second, the NDX/NAZ look like they have done five waves up from the Christmas low: another positive. Third, the SPX/DOW look like they have done three waves up from the low: a negative so far. Fourth, the largest rebound for B waves, under similar conditions, in the past three decades has been 13%. The rally reached 14% on Friday: turning this positive. Fifth, the maximum percentage rise in breath for a B wave has been 26%. Thus far breadth has risen 24%: a negative.

Since the market now has reached three of the five criteria this would raises the probabilities in favor a new bull market to 60%. A fourth positive would increase those probabilities, and a fifth would almost assure them.

Quite a strong rally from the Christmas low. We can clearly see five waves up on the NDX/NAZ charts. But the SPX/DOW charts still look like three waves. The first two waves we have noted in previous updates [2347] 2520-2444. Last week we noted a lot of rising but choppy activity, and thought a possible ending diagonal was forming. That idea was blown away this week, especially in the latter part. That rising choppy activity now looks like a series of 1-2’s before the SPX 2570 low.

Asian markets were all higher on the week and gained 1.7%.

Bonds appear to be in a new downtrend and lost 0.8% on the week.

Crude is in a new uptrend and gained 4.8% on the week.

Bitcoin remains in a downtrend and lost 1.0%.