The week started at SPX 2417. After a gap down opening on Monday’s half-session the SPX closed at a new downtrend low of 2351. Trading resumed with a gap up opening on Wednesday to SPX 2386, which was quickly sold off, and a new downtrend low was hit for the 7th day in a row: SPX 2347. After that the market abruptly reversed, and by the end of the day the DOW had gained a record 1000+ points. The SPX closed at 2468. A gap down opening started Thursday. The SPX hit 2398 in the afternoon, but ramped up into a SPX 2489 close. Two days of spectacular up moves. Friday had a gap up opening, hit SPX 2508 early, dropped to 2473, then hit 2520, before dropping to 2477, and closing at 2486. For the week the SPX/DOW gained 2.85%, and the NDX/NAZ gained 4.0%. Economic reports for the week were sparse and to the downside. On the downtick: consumer confidence, the Chicago PMI, and pending homes sales. On the uptick: weekly jobless claims improved. Next week’s holiday shortened week will be highlighted by monthly payrolls and ISM. Happy New Year!

In Q1 2018 the US had the biggest correction of its bull market, about 12%. But we knew it had one more wave up to new all-time highs before its bull market was over. It was a struggle with most of the world’s indices already in bear markets. But it got it done in September/October, and then rolled over into its own bear market. 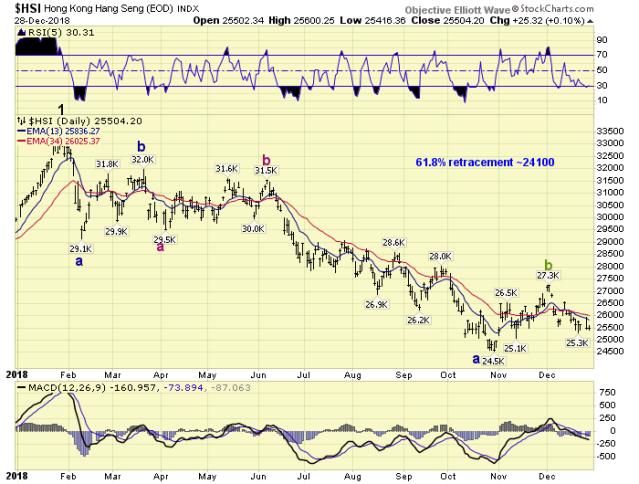 As for the US, the four major indices, SPX/DOW and NDX/NAZ, have had only one downtrend. It has been quite complex with many, many 60-100 SPX point waves. In fact, several times we labeled a tentative green Intermediate wave A low expecting an uptrend. All we got was a rally, and then lower lows. All along we felt the structure we had labeled was correct, but we were not quite sure about the wave degrees. This week’s activity, we think, gave us a hint.

If we look at some of the minor US indices from their bull market highs, we observe that they had a downtrend, an uptrend, and a downtrend. All while the four major indices have been in one downtrend. These indices are: R2K, SOX, TRAN, XLB, XLF, XLI, XLP, and XLV. Seems odd that the financials, industrials, transports, semi’s, and small caps all display the three trends, while the major four do not. Even the NYSE had three trends.

As a result of this weeks market activity, and the above noted observations, we are seriously considering that Intermediate waves A and B have already occurred. And Intermediate wave C has been underway since November. This count is posted on the DOW hourly and daily charts.

When considering everything previously noted. It is possible that the next selloff could not only end the bear markets internationally, but also in the US. At the beginning of the bear market we expected a short one of about 15%-20%. So far it has held within those parameters. We had thought that SPX 2400 would be the maximum downside. We got that wrong as the SPX has already hit 2347.

We see two potential support levels for the next, and maybe last, selloff. SPX 2310 C = 1.5 A, and SPX 2270 C = 1.62 A. The DOW C wave would have a 1.62 relationship to A around the SPX 2310. While is no pivot at SPX 2310, there is one at SPX 2321, 2286 and 2270. Also if the potentially last selloff is not too severe many positive divergences would be set up in the daily and weekly charts, with oversold monthly charts. These typically work to end downtrends and bear markets. We added some charts to the very end of stock charts to display how oversold the major indices really are. Here’s one.

Asian markets were mixed on the week and lost 0.3%.

Bonds continue to uptrend and gained 0.3%.

Crude continues to downtrend and lost 0.6%.

Gold is still in an uptrend and gained 2.0%.