The market started this holiday shortened week at SPX 2736. The market opened lower on Monday, traded down to SPX 2681, then gapped down on Tuesday carrying the market to SPX 2632 near the close. Wednesday was a gap up opening as the SPX rallied to 2671. Then during Friday’s half-day session the market gapped down, hit SPX 2631, then closed at 2633. For the week the SPX/DOW lost 4.10%, and the NDX/NAZ lost 4.65%. Economic reports for the week mostly lower. On the downtick: the NAHB, building permits, durable goods, consumer sentiment, plus jobless claims moved higher. On the uptick: housing starts, existing homes sales, and the leading indicators. Next week’s reports will be highlighted by Q3 GDP, the FOMC minutes and personal income/spending. Best to your week!

As we noted in our Wednesday update, the market took a turn for the worse this week deviating from the projected path we had been tracking for a couple of months. We were expecting a rally back to the SPX 2800’s. But the market gapped down on Monday, then never looked back as the SPX came within 1% of the October lows. As a result, the medium term downtrend that started after the bull market top has extended. We thought it had ended in October, but apparently that was only part of it. The ECRI continues to slip.

As noted, we had thought the first downtrend of this bear market could have ended in October at SPX 2604. There was a good rally to SPX 2815 in November. But that rally has nearly been completely retraced. Meanwhile the NDX/NAZ have already made lower lows in November. It is likely the SPX/DOW will make lower lows before this downtrend ends. This brings us to an interesting situation.

When reviewing the longer term NAZ charts we find the daily MACD is already more oversold than the 2016 and 2008 lows, and is as oversold as it was in the year 2001. The weekly chart is already as oversold as 2016, but not as oversold as 2009 and 2001. This suggests there is already a lot of bearishness in the growth sector. Which suggests it could be a lot closer to a bear market low than many think. We have also noticed the NAZ has done 5 waves down from its September all-time high. While the other three indices have been moving in a-b-c’s. A good counter-rally, then a solid decline into the lower 6,000’s may be all that is required to end its bear market. Something to keep an eye on in the coming weeks.

The SPX hourly chart is the same count we are carrying on the DOW and NDX. Here the first decline to SPX 2604 is only Minor A of Int. A. The rally to SPX 2815 is Minor B. And Minor C of Intermediate wave A is currently underway. This count would suggest that Intermediate wave B will be an uptrend. And then a new downtrend for Int. C will end the bear market. It will be interesting to see how it all unfolds. 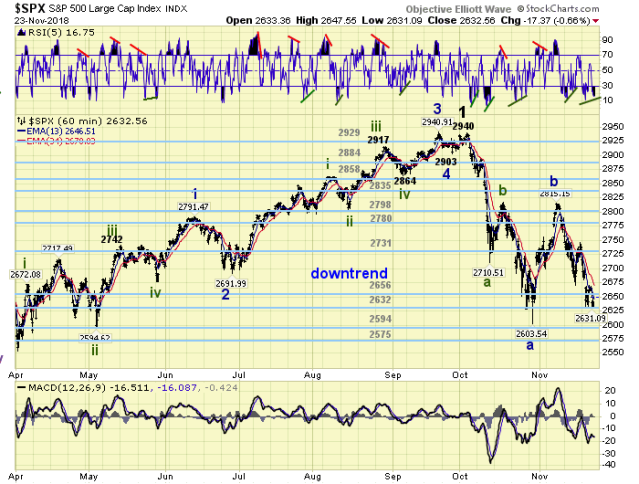 We don’t have much to add to the short term pattern. Three waves down to SPX 2604, three waves up to SPX 2815, and now three waves down to 2631 so far. Next logical support level appears to be around SPX 2554. Short term support is at the 2632 and 2594 pivots, with resistance at the 2656 and 2731 pivots. Short term momentum ended the week with a positive divergence. Best to your trading!

Asian markets were all lower on the week losing 1.4%.

Bonds continue to uptrend but ended flat on the week.

Crude continues to downtrend and lost 11.0% on the week.

Gold continues to uptrend but ended flat as well.

The USD remains in an uptrend and gained 0.3%.