The week started at SPX 2767. After a lower open on Monday and a trade down to SPX 2749. The market gapped up on Tuesday, and then hit SPX 2817 midday Wednesday. A gap down opening on Thursday took the SPX down to 2755, where it was trading on Monday. Then a gap up opening on Friday rallied the SPX to 2798 early morning, which was sold off for the rest of the day. For the week the SPX/DOW gained 0.20%, and the NDX/NAZ lost 0.65%. Economic reports for the week were mostly positive. On the downtick: housing starts, building permits, existing home sales, and the Philly FED. On the uptick: leading indicators, the NAHB, industrial production, retail sales, the NY FED, business inventories, plus jobless claims and the federal budget improved. Next week’s reports will be highlighted by the beige book and Q3 GDP. Best to your week!

Despite a volatile week not much has changed from last weekend’s report. The market traded above last week’s SPX 2711 low, and well below the SPX 2941 all-time high. The range for the week was SPX: 2749-2817. And the SPX gained 1 point for the week.

The SPX weekly chart displays the Major wave 1 bull market count from February 2016 to October 2018. Notice the five wave rise from the Primary II bear market low at SPX 1810, to the Major wave 1 high at SPX 2941. Five Intermediate waves, with five Minor waves creating a subdividing Intermediate wave iii. Intermediate ii was an irregular zigzag, and Intermediate iv was a flat. Minor 2 was complex and Minor 4 was simple. Alternation on every level. Same can be said for the DOW, NDX and NAZ chart patterns. They all mimicked each other, while at times not completely in sync.

While the last uptrend left a lot to be desired as for impulsivity. It was still tracked as Intermediate wave v, and expected to be the last uptrend of the bull market. We had noted months ago. If the uptrend surged it could pass SPX 3000 easily. If the uptrend struggled and took lots of time it would probably make only marginal new highs. The uptrend took six months, and exceeded the previous all-time high by only 2.4%. The DOW only exceeded its high by 1.2%.

Thus far the market has dropped from SPX 2941 to SPX 2711. We had thought that could be an important low, and so far it is holding as such. We labeled that low Minute wave A in dark green on the charts. The rally that followed has thus far risen to SPX 2817 for nearly a 50% retracement. We have labeled that with a tentative light green Minute B. So far the decline is moving along generally as expected. 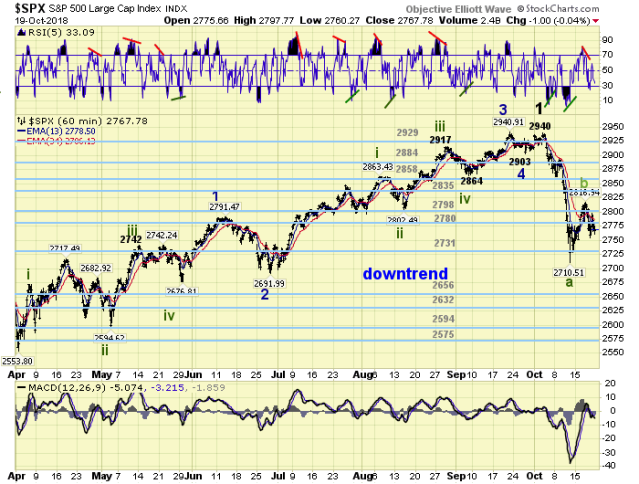 Short term support is at the 2731 and 2656 pivots, with resistance at the 2780 and 2798 pivots. Short term momentum ended the week just above oversold. Best to your trading! It’s a day traders market.

Asian markets were mostly lower for the week for a net loss of 0.7%.

European markets were mixed and gained 0.3%.

Bonds continue to downtrend and lost 0.2% on the week.

Crude appears to be in a downtrend and lost 3.7% on the week.

Gold remains in an uptrend and gained 0.6%.