The week started off at SPX 2905. After a dip down to SPX 2886 by Monday afternoon the market started to rally. Higher opens took the SPX to 2911 on Tuesday, 2912 on Wednesday, a new all-time high of 2935 on Thursday, and 2941 on Friday. For the week the SPX/DOW gained 1.6%, and the NDX/NAZ lost 0.25%. Economic reports for the week were mostly positive. On the downtick: the NY FED and building permits. On the uptick: the Philly FED, housing starts, leading indicators, plus weekly jobless claims and the account deficit both improved. Next weeks reports will be highlighted by the FOMC meeting, Q2 GDP and more housing. Another rate hike on Wednesday probable.

The Major wave 1 bull market extended into its 31st month for the DOW this week, as it made all-time new highs on Thursday. The SPX made all-time new highs as well. The NDX and NAZ had made their new highs in August. Now that the four major indices have registered five Intermediate waves up from the February 2016 low, it’s time to review the technicals.

The first observation is the building negative divergences on the SPX/DOW weekly and monthly RSI. Not a problem until new highs were hit. Now that they have, it’s a potential warning of a bull market high in the making. We can add that the R2K may also be in its last uptrend of its bull market. 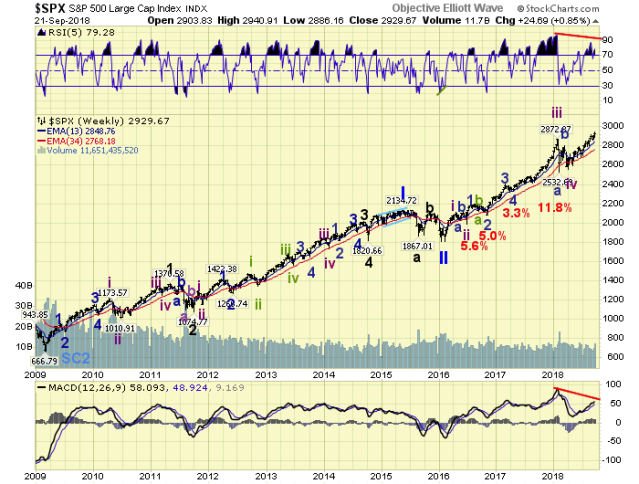 Typically nearing a bull market top various sectors begin to displays negative divergences as well. The banking index BKX, and the housing index HGX are doing just that. Plus, the four major indices breadth, as measured by the percentage of stocks above their 200 dma, are all displaying negative divergences. As well as the NYAD.

Last, the weakness in the foreign markets. Which most have been noticing for a while. Eleven of the fourteen indices we track appear to have topped. Three have already confirmed bear markets: China, Spain and Switzerland. And we know Switzerland usually tops within a year of an SPX top. After more than two years of riding the bull we think its time to get cautious.

For the past couple of weeks the SPX has had a short term inflection point to resolve. There were three possible counts. With this week’s new high one count was totally eliminated, one downgraded, and the other made the primary count. That count is on the daily chart below. This suggests the uptrend is in Minor wave 3 of Intermediate wave v, with Minor waves 4 and 5 still to unfold.

The NDX/NAZ continue to display weakness as the cyclicals make new high. In fact if they do not make new highs next week they will likely confirm a downtrend. And that might be it for their bull market. The only other thing that would alter this scenario is if Intermediate wave v were to subdivide into five Minor wave trends. Just like Int. iii. Other than that we continue to believe this is the last uptrend of the 2016-2018 bull market.

We have a similar situation with the DOW. You can check the hourly chart using the link below for that. Short term support is at the 2929 and 2884 pivots, with resistance at the 2995 pivot. Short term momentum ended the week at neutral. Best to your week!

Asian markets were mostly higher on the week and gained 1.3%.

European markets were all higher on the week and gained 2.1%.

Bonds are downtrending and lost 0.5% on the week.

Crude is uptrending and gained 2.6%.

The USD is downtrending and lost 1.5% during the week.