The week started at SPX 2802. After a lower open Monday, and a dip to SPX 2795, the market rallied to 2830 by Tuesday morning. A pullback quickly followed to SPX 2811 by Tuesday afternoon. Then the market rallied to SPX 2848 Wednesday. A larger pullback to SPX 2808 occurred on Friday. Then the market bounced to end the week at SPX 2819. For the week the SPX/DOW gained 1.1%, and the NDX/NAZ lost 0.9%. Economic reports for the week were mostly lower again. On the downtick: existing/new home sales, consumer sentiment, and weekly jobless claims rose. On the uptick: durable goods orders, and Q2 GDP. Next week’s reports will be highlighted by the FOMC statement, the ISMs, and payrolls.

This Major wave 1 bull market remains a simple Elliott Wave structure. A simple Int. wave i and Int. ii correction in the spring of 2016. Then a subdividing Int. wave iii. Minor waves 1 and 2 in the fall of 2016, and Minor waves 3 and 4 in the spring of 2017, then a Minor wave 5 / Int. wave iii top in January 2018. After that a three month correction for an Int. iv flat, alternating with the Int. ii zigzag. Currently an Int. wave v underway from the April low. Should Int. v be a simple structure, then the Major 1 bull market could end this year. And a Major wave 2, 15%-20%, bear market could follow. Should Int. v subdivide like Int. iii it could last into 2020. Stay tuned!

This Int. wave v uptrend, which began in early-April at SPX 2554, has been making higher highs this month as it continues to extend. Even though this rally is the fourth since early-April. We are still looking for the internals to look impulsive, like all previous uptrends in this bull market. The first three rallies did not. 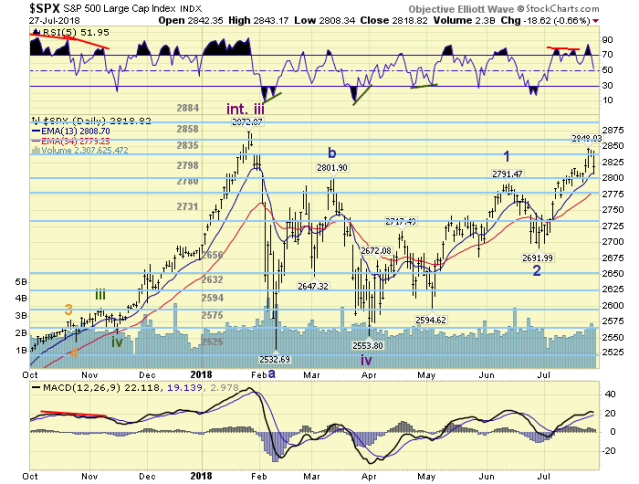 As noted in the recent weeks. The reason could have been that the three rallies were all part of a leading diagonal triangular first wave. Which would put this uptrend, after the wave 2 pullback by late-June, in a larger third wave now. Since third waves cannot unfold in diagonal triangles, the uptrend should start displaying impulsive internals now. 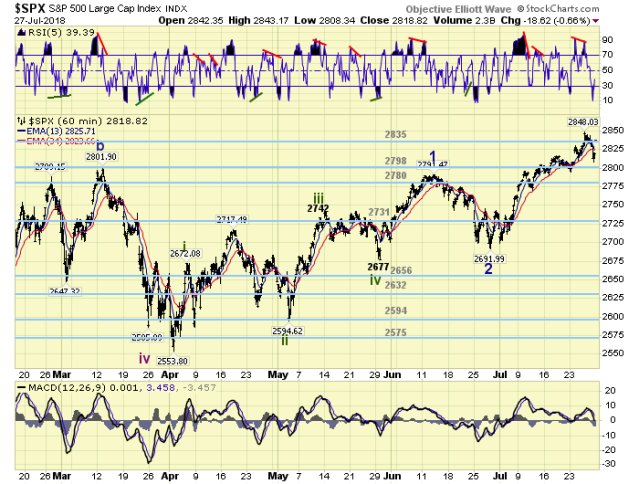 At this point is where the previous three rallies failed. Instead of finding support for a 4th wave, and then rallying to a higher high. Their declines continued until they overlapped their 1st wave. If this were to occur again the current decline would continue to below SPX 2743, before rallying to SPX 2848. Impulsive or more corrective activity? We think impulsive. Short term support is at the 2798 and 2780 pivots, with resistance at the 2835 and 2858 pivots. Short term momentum ended the week oversold. Best to your trading!

Asian markets were all higher and gained 1.1%

European markets were nearly all higher and gained 1.5%.

Bonds confirmed a downtrend while losing 0.6%.

Crude appears to be in a downtrend but gained 0.6%.