The market opened the week on a gap down, one of several, as it started to correct from last week’s SPX 1986 all time high. After hitting SPX 1953 on Thursday the market tried to rebound into Friday’s close. For the week the SPX/DOW were -0.80%, the NDX/NAZ were -1.05%, and the DJ World index was down 1.55%. Economic reports were sparse on this first full trading week of the quarter. On the uptick: consumer credit, wholesale inventories, the WLEI, a Treasury surplus, and weekly jobless claims improved. On the downtick: the monetary base. Next week we have the FED’s beige book, Industrial production and reports on Housing, to name a few, within a busy week.

The bull market went on pause this week as Portugal’s largest bank ran into problems, and fears of another European banking crisis arose. If you recall, the steep corrections of 2010 (17%) and 2011 (22%) were both European related. For the past three years Europe’s markets have been rising while their various problems have appeared under control. The charts, however, are suggesting this is just the beginning of a new set of problems as noted in this recent report: https://caldaro.wordpress.com/2014/06/16/europe-potential-market-turbulance-ahead-by-mid-late-2014/. In fact, England and France have already given back nearly all of their gains for 2014. Plus, all eight European indices we track are in downtrends.

The US market, however, has not yet reached its somewhat treacherous threshold. Primary wave III, of this five Primary wave bull market, continues to unfold generally as expected. Yet, as noted by the weekly chart below, Primary wave III appears to be nearing an end. It is just a downtrend and uptrend away from its conclusion. A Primary IV correction, similar to Primary II’s correction, could unfold with the catalyst again centered in Europe. For now, the SPX still needs to confirm an Intermediate wave iv downtrend, then an uptrend to new highs to complete Intermediate v, Major 5 and Primary III.

The mid-April Intermediate wave iii uptrend from SPX 1814 probably topped recently at 1986. The uptrend appears to have completed five Minor waves, with the fifth wave nearly a perfect 0.618 relationship to the first. Adding to this probability is the fact that all eight of Europe’s indices are in confirmed downtrends, and there are negative divergences, in the US, on the daily and weekly RSI/MACD.

With a weak Minor wave 5 downtrend support is unlikely to be found at Minor 4 (1945), or even Minute iv of Minor 3 (1926). Fibonacci relationships suggests two potential levels: 1920 (38.2%) and 1900 (50.0%). Since 1920 is outside of the 1929 pivot range, but 1900 is within the 1901 pivot range, we will carry all three as support. We are not expecting a long drawn out correction, and are looking for a low this month. Thus far, the market is acting somewhat like the Major wave 4 correction in January: remaining relatively close to the highs during the first week of the correction. Oddly enough, that was the last time all European indices were in confirmed downtrends too. Medium term support remains at the 1956 and 1929 pivots, with resistance at the 1973 and 2019 pivots.

Short term support is at the 1956 and 1929 pivots, with resistance at the 1973 pivot and SPX 1986. Short term momentum ended the week overbought. The short term OEW charts flip-flopped all week, which is generally a sign of a correction, and ended with the reversal level at SPX 1965. 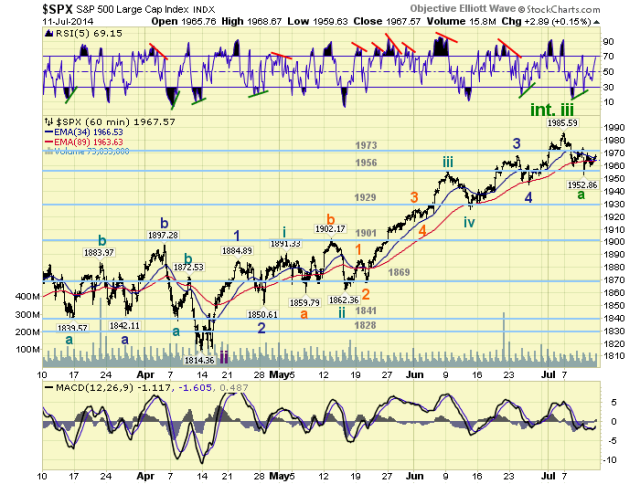 The Asian markets were mostly lower for a net loss of 0.5%.

The European markets were all lower for a net loss of 3.9%.

The Commodity equity group were mixed for net gain of 0.1%.

Bond yields are very close to confirming a downtrend, Bonds gained 0.9% on the week.

Crude is in a downtrend and lost 3.1% on the week.

Gold continues to uptrend gaining 1.3% on the week.

The USD is still barely in an uptrend but lost 0.1% on the week.