After making a new uptrend high on monday US markets then began to weaken throughout the holiday shortened week. The SPX/DOW were -0.95% and the NDX/NAZ were mixed. Asian markets were quite mixed again -0.2%, but European markets were all lower for the third week in a row -2.9%. On the economic front positive reports outnumbered negative reports 8 to 6. On the uptick: ISM manufacturing, factory orders, auto sales, the M1-multiplier, investor sentiment, the WLEI, plus both weekly jobless and the unemployment rate improved. On the downtick: construction spending, ADP, ISM services, monthly payrolls, consumer credit and the monetary base. Next week we’ll get reports on the CPI/PPI, Export/Import prices, the twin deficits and the FED’s beige book.

Primary wave III is clearly dividing into five Major waves. Major wave 1 concluded in October 2011 at SPX 1293, and Major wave 2 ended in November 2011 at SPX 1159. Major wave 3 has been underway since that low. The weekly charts have been displaying an extremely overbought RSI and MACD. These indicators only reach these types of levels during bull markets. In bear markets weekly RSI rarely gets overbought, and usually spends most of its time in oversold territory. While the MACD stays below neutral and is usually oversold as well. Since the RSI and MACD are still rising, and market breadth is making new highs, there are no signs of an impending bull market top any time soon.

MEDIUM TERM: uptrend may have topped at SPX 1422

As noted in last weekend’s update, foreign markets continued to deteriorate while the US market continued to rise. In February we also had this type of activity. But the four major US indices were quite strong then and pulled the rest of the world up with it. This time around the DOW was displaying weakness, and the NDX was losing upside momentum. After a five month uptrend, and a new uptrend high on monday, the US indices also started to weaken.

After a significant, and expected, pullback to SPX 1387 the market started to rally again. This time, however, the rally ended only five points higher, at SPX 1419. Then the market had another significant, this time unexpected, pullback to SPX 1392. In monday’s update, with the weakness in the foreign market increasing, we were prompted to detail a potential uptrend ending diagonal triangle being formed for Intermediate wave five. The wave action since the SPX 1414 high was unfolding in a symmetrical rising wedge shaped formation: 1414-1387-1419-1392-1422. In addition, there were negative RSI divergences on every timeframe up to, and including, the weekly charts.

Short term support is at the 1386, 1372 and 1363 pivot ranges, with overhead resistance at the SPX 1414, 1419 and 1422 levels. Short term momentum was quite oversold mid-week, then ended the week near neutral. This is normal for the beginning of a downtrend. The short term OEW charts remain with a negative bias under SPX 1404. 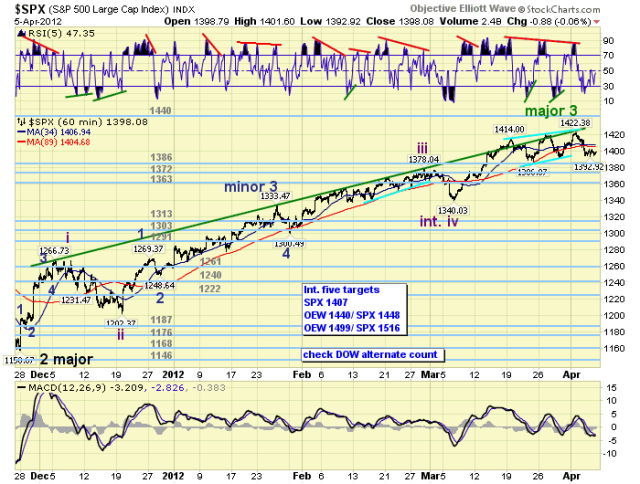 The market declined a bit on tuesday, hitting SPX 1405 intraday, and closed at 1413. Yet, when the SPX broke below 1404 on wednesday we posted a tentative ‘green’ Major wave 3 label at the SPX 1422 high. The market then traded down to SPX 1393 on thursday, creating the largest pullback since Int. wave iv. On friday, while the markets were closed, the ES futures dropped 15 points on a disappointing monthly payrolls report. Should the market open at that level on monday the SPX will have the biggest pullback since Int. wave ii. Currently it certainly looks like this uptrend ended at SPX 1422, after a five month 22.7% gain. Only an advance to new uptrend highs would change this opinion at this time. Best to your trading!

The Asian markets were quite mixed on the week for a net loss of 0.2%. China, Hong Kong and India are in confirmed downtrends.

The European markets were all lower on the week for a net loss of 2.9%. England, France, Italy, Spain and the STOX 50 are all in confirmed downtrends.

The Commodity equity markets were mostly lower for a net loss of 1.1%. They have also been lower for three weeks in a row. All three indices: Brazil, Canada and Russia are in confirmed downtrends.

The DJ World index is still uptrending but lost 1.5% on the week. Total confirmed downtrends, worldwide, are now at their highest level since the US uptrend began in November.

Bonds had a wild week but gained 0.4% and are still in a downtrend.

Crude was also quite volatile but gained 0.2% and is still in a downtrend.

Gold came under selling pressure this week and made new downtrend lows, losing 2.3% for the week.

The USD resumed its uptrend gaining 1.4%, as the downtrending EUR lost 2.1%, and downtrending JPY gained 0.7%.

Tuesday kicks off the economic week with Wholesale inventories. On wednesday, we have Export/Import prices, the Budget deficit and the FED’s beige book. On thursday, weekly Jobless claims, the PPI, and the Trade deficit. Then on friday, the CPI and Consumer sentiment. As for the FED. Monday night FED chairman Bernanke gives a speech on financial stability at the Atlanta FED. On wednesday night FED vice chair Yellen gives a speech on economic outlook and monetary policy at NYU. On thursday, FED governor Raskin gives a speech on the state of the economy at the San Francisco FED. Then on friday, FED chairman Bernanke gives a speech at the “rethinking finance” conference in NYC. This could be quite a wild week. Best to you and yours this holiday weekend.