The price history of the ZARUSD illustrates another commodity related currency. We recently updated the other two commodity currencies we track: the AUD and the CAD. Of these three currencies the ZAR shows displays a massive devaluation against the USD since it began trading in 1971. A decline from $1.50 in 1971 to $0.073 in 2001. Its Supercycle bear market began, however, in 1980 at the last commodity bull market peak. And, it bottomed at the last commodity bear market low in 2001. Naturally we are expecting the ZARUSD will peak again at the next commodity bull market peak in 2014. 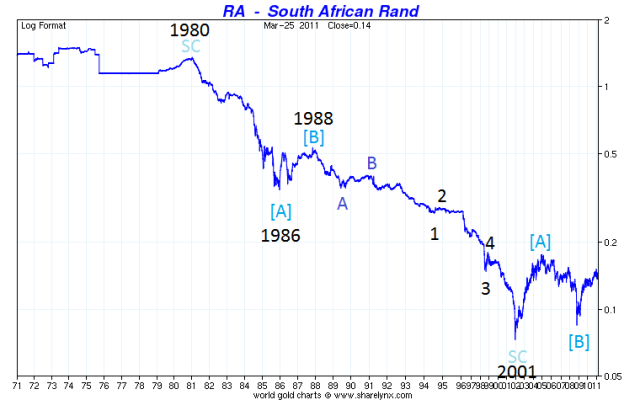 Typically currency Cycle waves unfold in three Primary waves: ABC. We observed this in the ZAR during Cycle wave [A] and Cycle wave [B]. Therefore we are expecting this pattern again in Cycle wave [C].

The ZAR weekly chart displays most of the three Primary waves of Cycle wave [B]. From that low we have counted a quadruple zigzag into the recnet ZAR 0.151 high. We tentatively labeled that high Primary wave A. The decline that followed was the biggest decline since Cycle [C] began, i.e. ZAR 0.151 to 0.136. We’re counting this decline as Major wave A of Primary wave B. The current uptrend should be Major wave B.

When the uptrend ends the ZAR should enter Major wave C and conclude with a lower low. After that Primary wave C should begin and carry the ZAR into a 2014 bull market top. Currently we’re expecting a bull market high around ZAR 0.20 in 2014. At that level Cycle wave [C] = Cycle wave [A]. If you would like to track the ZARUSD with us just scroll down the page using the following link: http://stockcharts.com/def/servlet/Favorites.CServlet?obj=ID1606987&cmd=show[s113312965]&disp=O. Best to your investing/trading!