The NYAD tracks market breadth on a daily basis. It is simply a sum total of the number of advancing stocks, on the day, minus the number of declining stocks. When there are more advances than declines it’s a positive number. When not, it’s a negative number. One can chart the cumulative total of the daily A/D numbers over a period of time. This is important information for investors.

During bull markets advances continually outpace decliners as buyers push most stocks higher. As a bull market unfolds cumulative breadth rises as illustrated by the monthly chart below. It also declines, naturally, as a bear market unfolds. 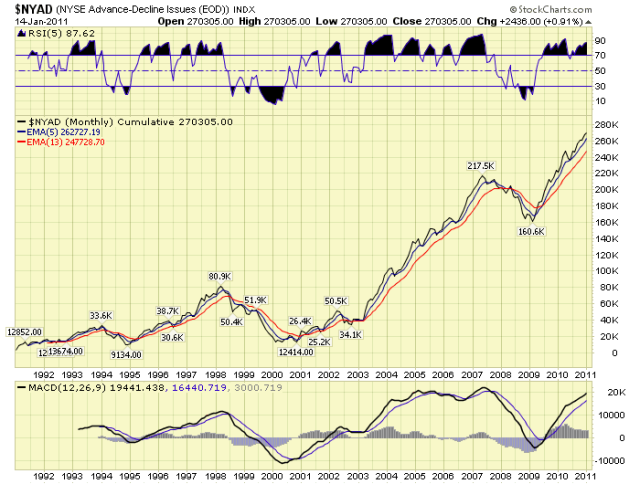 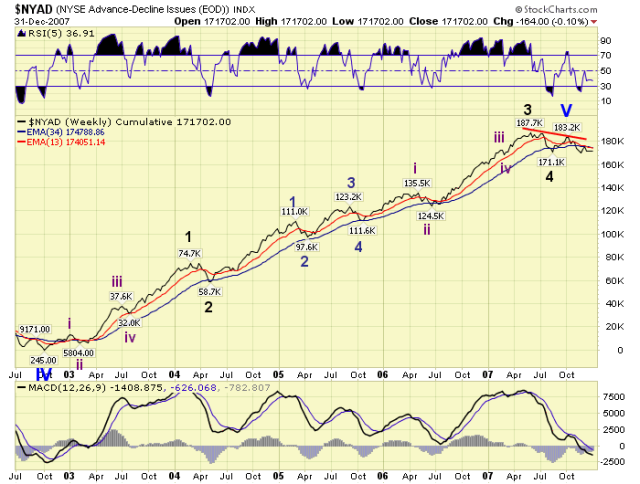 Starting at the stock market price low in October 2002 the NYAD starts to trend just like the stock market. Only OEW can identify these trends quantitatively. As the bull market unfolds in equities each uptrend in the NYAD rises to a higher and higher level. What is interesting is that the NYAD also unfolds in a five wave sequence, albeit slightly different than the equity market. The reason for these differences is that the NYAD is tracking uptrends/downtrends in bull markets, but the strength of these trends differ in intensity as the bull market unfolds.

In our example you will observe during the last uptrend of the equity bull market, August – October 2007, the NYAD failed to make a new high. This negative breadth divergence nearly always confirms the ending of a bull market fifth wave. This is the same exact type of failure that occurred in 1987 and 1990 right at the highs. Now let’s review the current bull market. 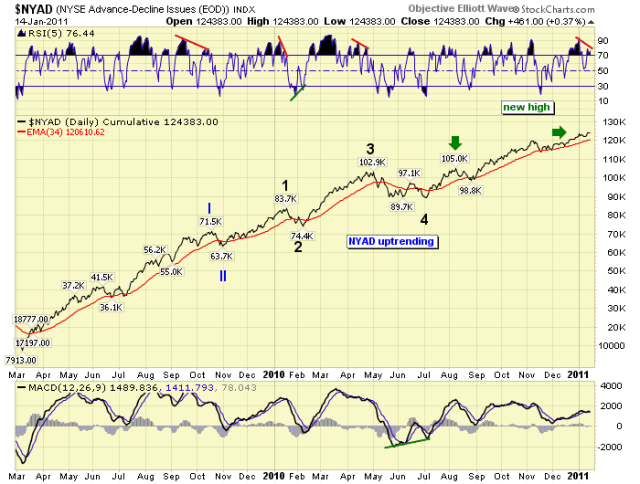 Observe, each stock market uptrend has carried this index to higher highs. And, this is continuing as the current uptrend has continually been confirmed by higher and higher cumulative breadth. The OEW count, on the NYAD, suggests this bull market has several more uptrends to go before there should be any signs of an impending top. This coincides with our bull market projection into 2012. When the first negative breadth divergence occurs the bull market in equities will likely be ending. You can track this index along with us using page 6 on this link: http://stockcharts.com/def/servlet/Favorites.CServlet?obj=ID1606987. The NYAD, market breadth plain and simple.