During 2010 we have heard lots of commentary on China’s economy and stock market. Opinions have varied from strong economic growth to an over stimulated monetary bubble awaiting a collapse. We have been tracking the waves and they have looked corrective. China’s SSEC is one of our least favorite OEW patterns of the fifteen world markets we follow. Recently, the complex wave pattern since its Oct 2008 low appears to be taking a recognizable form. 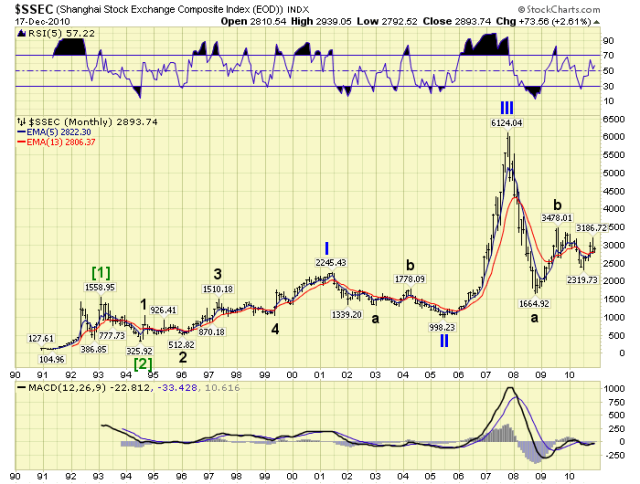 This is a chart of the entire history of the SSEC. Not much to go on since the launch in 1990. This market, however, has displayed tendencies to be quite volatile and generally independent of world stock market activity. While the world markets were experiencing a bull market between 1990 and 2000, the SSEC had several bull/bear markets lasting two to three years. When most of the world markets bottomed in 2002/2003 and entered a bull market into 2007, the SSEC remained in a bear market until 2005. Then it had a sky-rocketing two year bull market into 2007. The SSEC certainly moves to its own beat. 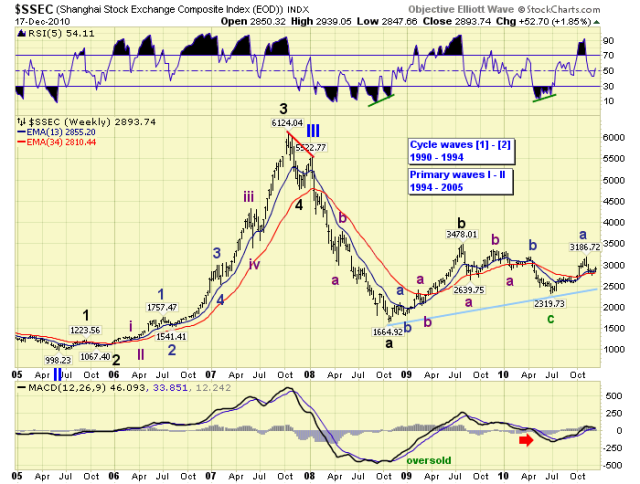 After the one year bear market into late 2008 the SSEC and Hong Kong’s HSI bottomed and started to rally. When the world market’s bottomed in March 2009 they all rallied together. Since the summer of 2008, however, the SSEC has been quite choppy and weak. The weekly RSI and MACD are not acting like the SSEC is in a bull market. They have looked bullish off the low, bearish and then bullish again. As a result of the recent activity we have updated our wave labeling to suggest that the SSEC has been in a Primary wave IV triangle since it completed a Primary wave III high in 2007. We have labeled the 2008 low as Major wave A and the 2009 high as Major wave B, of a five Major wave Primary IV triangle. 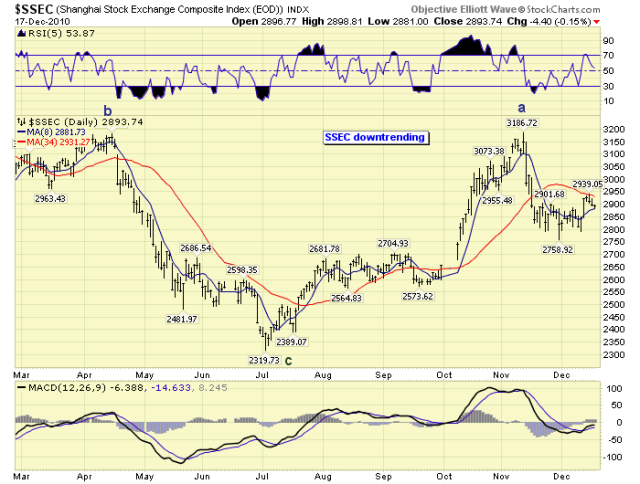 The 2010 low appears to be Major wave C, but this has not been confirmed by OEW. As a result of this update we expect the SSEC will remain in a 1,000 point trading range until this triangle concludes in 2011. Then we are likely to see a short two year bull market to new highs to conclude Cycle wave [3]. China’s SSEC is on page 9 of our public charts: http://stockcharts.com/def/servlet/Favorites.CServlet?obj=ID1606987.