Today we review Canada’s currency after reviewing Canada’s TSX yesterday. We have data going back to 1950 on the CADUSD, but unfortunately no publishable chart. Between 1950 and the late 1970’s the CAD traded between the low $0.90’s and the $1.08 area. After a top in 1974 and then a secondary top in 1976 the CAD entered a 26 year bear market. This decline started earlier than the 1980-2001 Commodity bear market, and ended one year later in 2002. The CADUSD pair appears to be greatly influenced by commodities.

The monthly chart displays the bottom arrived in 2002 at $0.6192. After this low the CAD started quite a strong bull market as the commodity bull market started to pick up momentum. By 2007 the CAD had risen, in a large ABC, to the highest level ever at $1.1017. Then when most global equity markets topped in late 2007 and entered a bear market the CAD headed lower along with them.

The weekly chart displays a low in March 2009, which was the low for most global equity markets, at $0.7659. Since then the CAD has worked its way higher, in a series of abc’s, into the recent recovery high of $1.0051. After that high the CAD entered a trading range while trending in a series of smaller waves. This is displayed on the daily chart below. 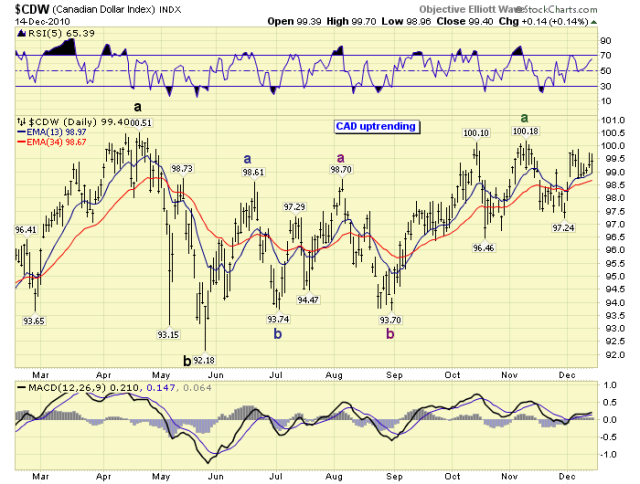 When we compare the current wave pattern between 2008 and 2010 with the wave pattern between 2002 and 2006 we find them almost identical. This often occurs in currencies. To complete this rising pattern the CAD requires just one more downtrend and then another uptrend. After this activity there should be a sharp selloff, similar to 2006-2007, then another ABC rally into the bull market high.

In summary, for the next six months or so the CADUSD should be quite choppy. Then after a decline of less than 10%, the CAD should rally strongly in another ABC pattern. We do not expect the CAD to reach the previous 2007 high at $1.1017 during the last surge. That was probably the orthodox high of its bull market. By late 2011 to 2012 we expect the CADUSD to enter another multi-decade bear market. Possibly back to the 2002 lows around $0.60. To track these charts you can use the following link: http://stockcharts.com/def/servlet/Favorites.CServlet?obj=ID1606987&cmd=show[s113312965]&disp=O

5 Responses to CADUSD the Canadian Dollar